THERESA May has confirmed the Brexit negotiations continue to be a ‘gigantic sea of piss’.

The prime minister insisted that any ‘sense of optimism’ in the wake of last week’s agreement was ‘just another fuck-up’. She then unveiled a rudimentary drawing of the gun towers she wants to position along the Irish border from March 2019.

She said: “Yesterday I instructed David Davis to renege on the Irish border deal and this morning I instructed him to retract that.

“I am now retracting that retraction, while insisting that these gun towers will never be built.

“Let me be clear – I fully intend to build these gun towers.”

The prime minister added: “Nothing is agreed until everything is retracted. Nothing is everything until retraction is agreement.

“That is the definition of leadership.” 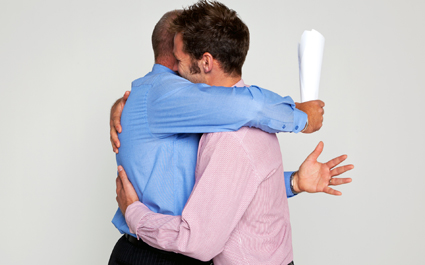 MEN are split over where a full embrace is really an appropriate way to greet other males.

Man hugs were introduced 25 years ago as a response to the power combination of Ecstasy and house music. The tactile greeting has since spread throughout social life and work, sometimes causing extreme awkwardness.

Teacher Stephen Malley said: “I’m okay hugging another man if their grandad’s just died, but not if they’re just my Natwest mortgage advisor.

“If I’m just dealing with another man in a work context then I don’t particularly need to feel his hot breath in my ear.”

Professor Henry Brubaker at the Institute for Studies said: “Last week we discovered a dentist met a new client to discuss root canal work and warmly hugged him in the reception area. It was horrible.

“Mostly it’s a middle class phenomenon, at the moment we’re predicting man hugs to take at least two years to reach plumbers but it may be sooner.

“Why did we let this happen? It used to be such a simple world.”