THERESA May has promised to be a steady hand on the tiller before fucking up hugely on her first day in charge.

The new prime minister’s promises to guide Britain sternly and sensibly were cautiously believed for up to five hours before the appointment of Boris Johnson as foreign secretary, setting a new record in losing the nation’s trust.

Political commentator Julian Cook said: “I was literally writing the last sentence of a piece about how we’d seen the end of an era of rash political gambles when May announced that she had shat the national bed.

“Boris Johnson, Foreign Secretary is the title of a lottery-funded British straight-to-streaming sex comedy, not an actual political decision a rational person could make.

“May has set out her stall by fucking up with hugely impressive alacrity and in a manner that leaves the electorate in absolutely no doubt that this is the first of many ruinous misjudgments on her part.

“If she can keep this up she’s in with a chance of being the most hapless imbecile we’ve had leading the country since, well, David Cameron, I suppose..

“To think, just yesterday afternoon we all thought she was ruthlessly efficient. Seems like years.”

Off you f**k, Queen told Cameron 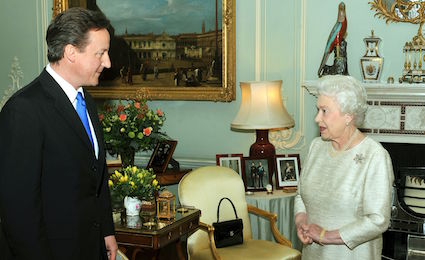 THE Queen assured David Cameron that he was her worst prime minister ‘by miles’.

It has emerged that when Mr Cameron tendered his resignation to the Queen at Buckingham Palace, Her Majesty interrupted him and said: “Including your good self, I have been served by 12 prime minsters.

“I liked Sir Winston, because he fancied me, Macmillan was like something out of Dickens and Wilson was a cheeky little Yorkshire monkey. The rest of them were a bit… weird. Especially Mr Brown. Very strange man.

“But you, Mr Cameron, are a prize arse.

“Northern Ireland has gone all wobbly, Scotland is half way out the bloody door, meanwhile most of my subjects are scared shitless and we’re seeing a delightful upsurge in racism. Well played Mr Cameron, well played.”

The Queen added: “If I see you round here again, I will order the Grenadier Guards to dangle you from the front gates by the waistband of your underpants and then get some tourists to throw fistfuls of cheap ham at your big, shiny face.

“Then again, from what I hear, you’d probably love that, you dirty bugger. Not even Prince Andrew has done that, and – trust me – that boy is a freak.

It is understood that as Mr Cameron left the Palace, he turned to his wife Samantha and said: “Actually, that went reasonably well.”