May unable to do deal at Tesco checkout

THE prime minister has caused chaos at a Tesco checkout after being unable to do a deal where she handed over money for goods.

May was spotted at the Tesco Express on Bridge Street promising cashiers that she had shopped with ‘humility’ and her basket contained groceries that were ‘right for Britain’, but refusing to discuss payment.

City worker Joanna Kramer said: “It was definitely her. She was doing her stare.

“They kept telling her the bill was £15.34 and asking if she had a debit card, and she’d just repeat that ‘this early in negotiations was not the time to show her hand’.

“The cashier offered to put some things back if she couldn’t afford them, but she refused because she had committed to deliver these specific items to the people.”

Kramer added: “Then she just stood there, saying nothing, ignoring all suggestions that she leave.

“I left after 10 minutes. She’s probably still there.”

Queen’s Speech ends with ‘f**k this’ 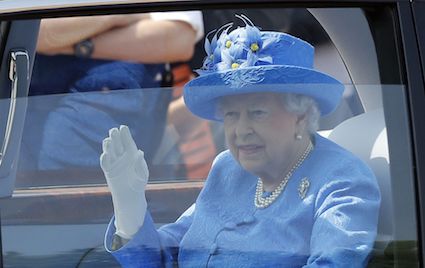 THE Queen’s Speech has ended abruptly with the words ‘fuck this,’ spoken halfway through a sentence, before the monarch wandered off.

The speech, a series of meaningless commitments, proceeded as normal until Her Majesty paused, looked around the chamber and decided she had had enough.

Julian Cook, Tory MP for Norfolk South, said: “She was supposed to be moving on to our exciting new plans to regulate the internet as a prelude to closing it down entirely, but instead she just stopped, sighed and looked at us with an expression of severe disdain.

“Her withering gaze seemed to turn on the front bench before she said ‘fuck this’ very clearly. Everyone heard it. Beautiful enunciation.

“Then she left, got into the back of the Rolls and shouted, ‘Ascot and pronto’.”

Labour MP Roy Hobbs said: “I wasn’t expecting to agree with any of it, but I think her final proposal will win enthusiastic cross-party support.”