No longer talking about the future: six signs Scotland is thinking of leaving you

ALWAYS in a bad mood, never laughs at your jokes, and left a draft bill for an independence referendum in the printer? Signs Scotland might be thinking of leaving:

Over tiny little things like ‘who’s better at protecting their citizens from a pandemic’ or ‘not wanting to house asylum seekers on Mull’. One lengthy politically-motivated witch hunt and she causes a huge public scene. It’s almost like she doesn’t want to be around you.

She knows you’d like it if she put up a Union Jack now and again, but it’s just saltires all day, every day. It’s always Burns Night and never St George’s Day.

She doesn’t want to be intimate

When was the last time you shared a moment? Don’t say the 2012 Olympics because we all know that was about you. There’s always an excuse, but we know what she means when she says ‘stay in your local area’.

She spends all her time online

Why is she always on Twitter or whatever? Who are these ‘OneTruScots’ and ‘YesTheBruce’ that she’s always talking to on there? Never mind that you spend all your time posting ‘Delusional Braveheart-on-repeat Jocks have never heard of the Barnett Formula’ on Telegraph comments.

She wants to see other people

You tried cutting her off from those European friends who always hated you, but now she’s talking about wanting to see them again. Move back in with them. Share fish with them. And she threw back your offer to give her a couple of minor Royals as ‘insulting’.

She packed her bags before

Last time you barely won her back. She was already halfway out the door and you gave her promises you knew you wouldn’t keep. It’s only a matter of time, pal. Let her go. 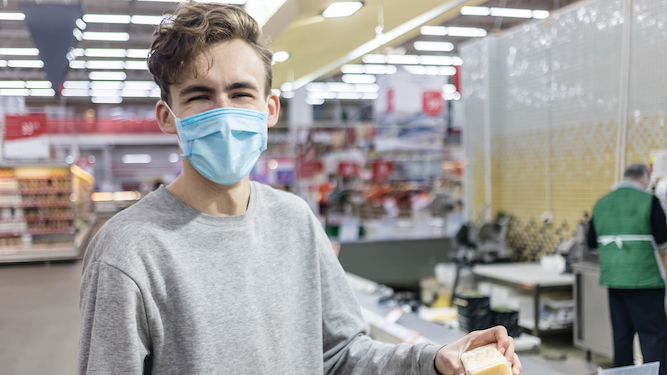 WANT to celebrate a year of lockdown by strutting down the Asda aisles like John Travolta doing a Liam Gallagher impression? Try these:

The flu brigade blocking your way to the Rustlers burgers in their masks? Don’t scuttle apologetically through a narrow gap. Walk aggressively toward them and watch them scatter like chickens as an alpha shopper arrives.

Body language is the easiest way to let everyone know they need to piss off out of it. Throw those arms out wide, go at your own pace and let the geriatric and nervous worry about it when you double back after changing your mind about how many packs of bacon you’ll need.

Being the biggest dickhead in the supermarket is easy – you just have to own it. Have confidence and treat the place like it’s your gaff and they’ve got a nerve being there. After all you shop there twice a week, spending upwards of £80, so you’re paying the wages and it’s your shop and you can do whatever you like.

Talk on the phone

Some people don’t understand subtlety. So give a mate a call, pull your mask below your chin and talk loudly about the idiots who’ve fallen for the pandemic scam and how social distancing can piss off. You’ll empty any aisle you walk down.

Be genuinely thick as pigshit

To crash through even the smallest Sainsbury’s Local like other people don’t exist it helps to be authentically stupid. That way you can still say ‘I’ve no idea how long two bloody metres is, have I?’ after a year of explanation while bouncing off people to get to the lagers.