TODAY’S Northerner is now almost on a par with humans, the Conservatives have announced.

According to an opinion poll, only 57% of Conservatives now believe that Northerners are an exclusively male race which reproduces via intercourse with stoats, ferrets and badgers.

A party spokesman said: “The modern Northerner has evolved to such an extent that it could be brought along to a dinner party, perhaps on a leash or in a very big jar.

“Indeed the progress of the Northerner is in many respects analogous to that of its beloved pie.

“Once it was little more than a pastry receptacle for pulped genitals adrift in an oozing black tar, shunned by even the semi-literate.

“Now it frequently contains fair to average meats and is served to dinner guests across Surrey, often with a salad garnish and a hint of irony.”

Brown Dangerously Close To Realising What's Wrong With Him 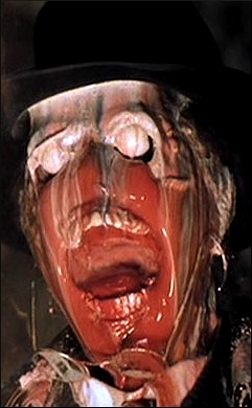 GORDON Brown has taken another small step towards finally realising what's wrong with him, it emerged last night.

As the prime minster began to accept a limited degree of responsibility for the financial crisis, experts said he could now be just days away from a catastrophic episode of horrifying self-awareness.

Political psychiatrist, Dr Martin Bishop, said: "It is crucially important that his family and friends are there to support him because he may now be lining up his brain for a final approach into reality airport.

"When he finally hits the tarmac they are going to have to speed towards him in the fire engines of consolation, before drenching him with the thick, white foam of love and understanding."

Dr Bishop warned that Mr Brown could now be on the verge of accepting responsibility for selling Britain's gold reserves at the bottom of the market, destroying the private pension system while protecting the pensions of the people who vote for him, under-equipping British soldiers in Afghanistan and Iraq, using taxpayers money to save the Labour Party from bankruptcy and generally spending his entire career being a lying, manipulating, self-absorbed thug who has tried to smear and destroy every one of his opponents.

He added: "If each of these realities hit him in rapid succession, his psyche could then begin to collapse in on itself.

"That's why those closest to him must be on hand to try and prevent what will basically be the psychological equivalent of the Gestapo torturer whose face gets melted at the end of Raiders of the Lost Ark.

"Actually, on second thoughts, don't – I really want to see that."