Osborne to blame everything on time machine

GEORGE Osborne will today blame Britain’s economic woes on a time-travelling Labour MP from the year 2044.

In his autumn statement the chancellor will say that Tom Logan, a future cabinet minister who was born in 2009, has been using a time machine to meddle with the British economy.

A Treasury source said: “Logan is the Peter Mandelson of the 2040s. We believe he has perfected time-travel and is now using wormholes in the space-time continuum to lay the groundwork for an endless series of Labour landslides.

“He arrives in his time machine and then hacks into the Treasury’s mainframe computer to ensure that every single one of our decisions is completely wrong.

“Then he returns to 2044 where he discovers to his immense satisfaction that the Conservative Party no longer exists and has been replaced by a handful UKIP MPs led by Nigel Farage III.”

Later today Osborne will outline plans to hunt down the infant Logan and lock him in a dog cage.

The source added: “We still don’t know that much about him. Where was he born? What does he look like? Perhaps at some point he changed his name? Perhaps he’s not even British?

“And, if Logan is anything like Mandelson, he will almost certainly have created an invincible robot to travel back in time to protect his younger self.

“If only we can find the child version of Logan and stop him from becoming a politician then we should see growth of about 1.1% by the end of 2015.” 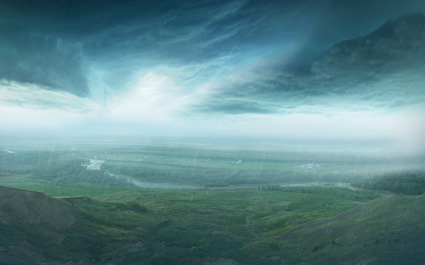 THREE billion year-old fossilised rain made a brief stop in Africa before continuing its inevitable journey to Britain, experts have confirmed.

Fossologists said the imprints of ancient raindrops were exactly the same shape as the trillions of fuckers that fall on Britain every single fucking day.

Dr Julian Cook, professor of it pissing down all the fucking time at Roehampton University, said the fossilised rain was so obviously British it made him want jump in front of a fucking bus that would probably be late because of the fucking rain.

He added: “At least the dinosaurs got fucking pissed on.”