Happiness caused by things you're not actually involved in

HAPPINESS is the result of things that actually have nothing to do with you, it has emerged.

Big events like a royal baby, the Jubilee or the Olympics are far more important to your inner well-being that anything you might do for yourself.

Professor Henry Brubaker of the Institute for Studies said: “The secret of happiness is to live vicariously through others, especially those who are richer, handsomer and generally less mundane than you.

“Your own existence is just a grim carousel of meaningless toil, punctuated with short breaks to consume caffeinated drinks and something called a ‘cheese melt’.”

The Institute for Studies found that the happiest people were those who believed the newspapers and the telly.

Professor Brubaker said: “If the telly says, ‘this thing is happening and everyone is really happy about it’, go along with that.

“Look at all the smiling faces and the bunting, absorb the joy into your soul. They’re happy. You should be happy too, unless there is something seriously wrong with you.

“In the near future, those who refuse to participate in collective happiness will be tied behind horses and dragged face-down through the streets while crowds pelt them with jagged bits of stale bread.

“And everyone will be happy about that.” 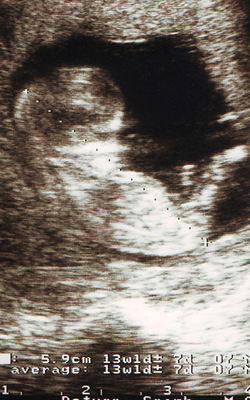 THE royal foetus plans to get a pair of mediocre A-levels, have a brief military career or set up an unsuccessful cake business, it has emerged.

Speaking via ultrasound, the foetus announced that before its coronation it would pursue various quasi-jobs while spending at least four months of the year on skis.

The foetus said: My early years will mainly consist of being a perturbed-looking child, after which I will attend one of the less academic public schools to acquire a C in German.

After university I’ll go into my favourite bit of the army for a while before becoming honorary president of the Camera Obscura Appreciation Society.

If Im a girl Ill skip the military bit and set up a niche business supplying inedible cupcakes to equestrian discos.

However, rest assured that none of this will affect my official duties of smiling at Africans, standing on balconies and signing parliamentary bills into law.”

The foetus added that while it pursued its career, it would enjoy a colourful love life.

It added: Ill be having a series of relationships with people whose names would have been rejected by Julian Fellowes for being too cliched.

Thats until I find one with sufficient genetic differences so that the breeding cycle can begin again.