BORIS Johnson has demanded a version of Europe that came to him in a dream.

The massive blond-haired child said he had dreamt of a Europe where all the other countries would re-arrange everything to our advantage because we invented puppies.

“Then he told me how the European Union had been invented so that Britain would be happy and that if it made us sad then it was obviously horrid.

“Then he told me that we could have a really special and lovely relationship with the EU, a bit like Norway and Switzerland, except we wouldn’t have to pay loads of money and obey all the rules like they have to.

“And then I said that sounded spiffing and that everyone in Britain would vote for it and then our seatbelts could be whatever shape we wanted.”

An EU spokesman said: “When Britain leaves the EU we will have to pay more for top-quality British products like payment protection insurance.

“Admittedly Scotch whisky will also be more expensive so we’ll just have to make do with Cognac, Armagnac Calvados, sherry, Madeira, grappa, schnapps, kirsch, and of course the absolutely delicious Kumquat of Corfu.

“You are such dicks.”

Atheists still not that keen on Scouts 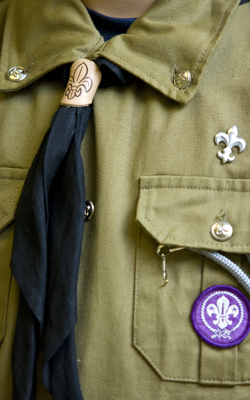 ATHEISTS are still not that keen on socialising with people who were in the Scouts, it has emerged.

As the organisation finally allowed atheists to take the Oath of Being a Scout, non-believers said there was something about former scouts that made them vaguely uneasy.

Tom Logan, an atheist indoorsman, said: “Perhaps it’s the burning desire to be led – that blind faith in all forms of authority. Maybe it’s the whole Hitler Youth thing, or just the shiny, do-goody, spotlessness of it all. I can’t quite put my finger on it.

“Or maybe it’s just the fact that they really enjoy camping which, as anyone who favours science over voodoo knows, is stupid and wrong.”

The Scouts claimed the organisation was no longer a religious militia for the under-21s, insisting it now offered badges in rationalism, intellectual independence and mushrooms.

A spokesman said: “A lot of scouts who do the mushroom badge actually become more religious.”

Helen Archer, a godless woman from Stevenage, added: “Finding out someone was in the Scouts for more than, say, a year is a bit like finding out they go to church. You’re not quite sure if it’s okay to say ‘fuck’ in front of them.

“Also, l have a deep-seated fear of the ease with which they are able to start fires.”