DAVID Cameron has become the latest Tory to receive a sound beating at the hands of the police.

The Conservative Party leader was set upon by three officers on Friday night as he walked home from his local pub in Oxfordshire.

Footage obtained by the Sunday Mirror shows Mr Cameron asking the officers if they had been busy, adding, 'I hope you're not going to arrest me'.

The three officers then chased the Tory leader briefly before pinning him to the ground and beating the absolute shit out of him.

Eyewitness Wayne Hayes said: "Two of them held his arms and legs while the biggest one kept banging his face against the tarmac and then punched him repeatedly in the back.

"The whole time I'm thinking to myself, 'what has he done to deserve this, apart from not having a coherent response to the global economic crisis?'"

Mr Cameron said last night: "It was nothing more than a bit of playful banter. It does worry me that the leader of the opposition cannot enjoy a night in the pub without having his face smashed in by the police."

Home secretary Jacqui Smith denied any knowledge of the plan to knock hell out of Mr Cameron insisting the officers were only supposed to push him around a bit and maybe give him a slap.

She also dismissed accusations of 'Stalinist' tactics, adding: "I would say it's more like Castro's Cuba or Chile under General Pinochet." 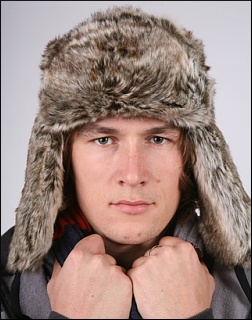 BRITAIN was awash with stupid bloody hats yesterday as the temperature dipped below freezing for the first time this winter.

As the cold snap entered its third day trainee solicitor Julian Cook wore a brightly patterned Inca hat with his business suit that made him look like he had escaped from a mental hospital.

In Colchester accountant Tom Logan went for the retro communist look with a cheap Russian-style fake fur hat from Millets. Everyone said he was an arsehole.

Meanwhile, in Glasgow one young man wore a Fair Isle patterned wool skullcap teamed with a grey duffel coat and red cord trousers until he was beaten to death by a blood-thirsty mob.

Henry Brubaker, head of hats at the Institute for Studies, said: "So far today I have seen a beret, two homburgs, a boater, a pirate hat, five sou'westers, two panamas, a pith helmet and a bearskin.

"These are all perfectly nice hats but they should only ever be worn indoors."

He added: "Unfortunately too many people these days are using cold weather as a way of expressing their unbearable personalities.

"If it is very cold and you are tempted to go out wearing one of your stupid bloody hats, don't forget that you may end up being shoved under a train."