THE Scottish Tories were accused of blatant populism today as they unveiled a manifesto bursting at the seems with sex, booze and holidays.

The party has pledged to cut the price of alcohol, especially the sexy drinks like Cinzano, Baileys and Tia Maria.

Meanwhile local communities will be encouraged to set up neighbourhood sex parties to promote social cohesion and having a good time.

In addition, the weekend will be extended to include Monday so that workers can recover from 48 hours of wild, booze-filled sexiness.

A party spokesman said: "Someone in the research department noticed that Life on Mars seemed to be terribly popular these days so we decided to give the manifesto a distinctly '70s feel.

"We took it to the party leadership expecting a few amendments here and there, but you know Annabel, she's up for anything." 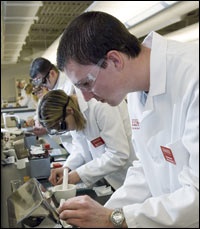 RESEARCHERS last night claimed they had discovered a gene which increases people’s propensity to launch enquiries into the bleeding obvious.

According to the scientists people with two copies of the “obvious” gene had a 70% higher risk of spending their lives working on pointless experiments to prove what we already know than those with none.

Professor Tom Booker of Glasgow’s Clyde University medical school said the amazing discovery was made purely by accident while he and his team were working on another experiment.

“We were busy on a project investigating whether people prefer crisps to raw slices of indigestible potato when one of our subjects suggested this was a waste of time.

“We then reviewed all the department’s experiments for the last decade and discovered that every one of them had just proved something everyone already knew.”

The team then tested each other on their ability to spot the obvious against a control group of normal people.

Both groups were asked a series of questions such as “are clean windows easier to see through than dirty ones?” and “are homicidal maniacs more likely to commit murder than priests?”

On each occasion the general public answered the questions correctly while the scientists said they did not have a clue and asked for a large grant to fund a protracted research project into the subject.

Prof Booker said subsequent testing showed that none of the general public had a copy of the “obvious” gene, while all the scientists had at least two.

He said this suggested many scientists had a genetic predisposition towards studying the bleeding obvious and that, therefore, the general public should be a little less hard on them next time they published research proving that people walking down the street with their eyes open were less likely to walk into lampposts than those who had them shut.