Shame to waste Corbyn on a snap election, says May

THERESA May does not want a snap general election because it would be a waste of Jeremy Corbyn, she has confirmed.

The Conservative leader still has lots of policies she wants to pursue while she has an entirely ineffectual opposition and has no intention of rushing anything.

She said: “You don’t throw away your Get Out of Jail Free card at the first opportunity. You save it for when you really need it.

“And when it’s cast-iron bolted-on that you’ll win the next election at a walk, no matter what you do to the NHS or the public finances or whatever, then you take your time.

“The Brexit court thing is annoying – I have dinner plans for April 2019 I don’t want to change – but the last thing I need is the Labour party coming to their senses and getting in my way.

“I’ve got free licence to do whatever I want to Britain for the next nine years and I can’t do any of it without Jeremy. He’s not going anywhere until 2020.”

Corbyn said: “Thank Christ for that, I thought I was going to be out of a job.” 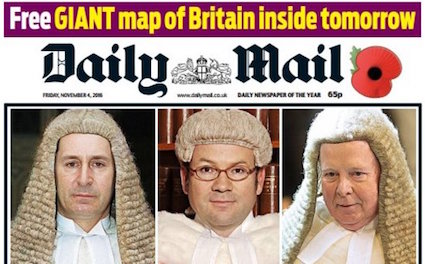 THE Daily Mail is giving every reader a free ‘giant map of Britain’ to help them hunt down local traitors.

The paper said the map is particularly huge to allow the millions of names and addresses to be included without the letters being too small to read.

A Daily Mail spokesman said: “It’s about 16 foot wide and 28 foot long. You can pin it to a large outside wall, though if you live north of Swindon you’ll need a ladder to examine it. Or just lay it on the floor, the lawn or a nearby public park.

“At that point  – assuming you know where your home town is actually located – it’s really easy to find all the traitors within your midst who want to hand this country over to Guyana.

“We’re also giving each reader a giant pen so they can score off each traitor’s name as they are being bundled into the back of a van by some soldiers.”

The spokesman added: “It’s a lovely, traditional way of hunting down communists and homosexuals using a proper British map.”