Theresa May not speaking to public until they say sorry

THE prime minister is not speaking to the people of Britain until they apologise, and is furious that they do not seem to have noticed.

According to Downing Street sources, the silence is set to continue until a particular, very specific apology has been received but it is up to the public to work out exactly what it is.

The source continued: “Apparently you’ve really done it this time.

“She is stalking around the place banging drawers, slamming doors and watching old Midsomer Murders with her arms folded in a very pointed way.

“And the fact that not one single person out of 65 million has so far spotted that they’re getting the silent treatment has made it much, much worse. She’s livid.

“All I know is that it’s not just the election, it’s the way the public have behaved or their attitude, or so I think she’s hinting. Anyway, we need a ‘sorry’ or we’ll never hear the end of it.”

Office worker strangely not praised for being shitfaced in meeting 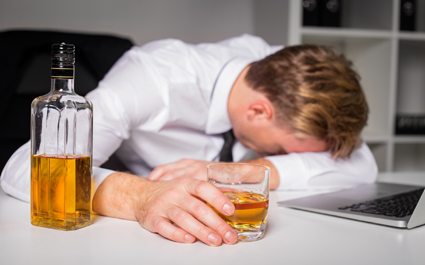 AN EMPLOYEE was surprised to receive a formal warning for drinking heavily in a meeting like Sports Direct boss Mike Ashley.

Administrator Wayne Hayes assumed Ashley’s drink-fuelled meetings were the sort of ballsy, unconventional behaviour that would be welcomed in the business world.

Hayes said: “I drank nine pints at lunchtime then staggered into a meeting with a catering-size bottle of gin. People looked shocked but I just assumed they weren’t up to speed on modern business practices.

“My boss Lorna asked me what the hell I was doing, so I challenged her to a drinking competition. She’s clearly not a team player because she wouldn’t touch the vodka shots I lined up for her.

“For some reason I got the urge to give everyone a macho motivational speech, so I staggered round the room shouting ‘We’re gonna make BILLIONS because we’ve got BIG FUCKING BALLS!’

“Then I was sick on a photocopier, but rather than cheering me on everyone kept saying ‘Oh my god!’.

“The next day Lorna gave me a massive bollocking instead of praising my no-nonsense style. She’ll be sorry when she’s working for me in my massive fuck off warehouse and I won’t even give her a free mug.”