THE #Tories4Corbyn campaign has greeted its candidate’s victory by vowing to back him all the way to the general election.

Rebranded as #Tories4Corbyn4EVA, the right-wingers who joined Labour in order to vote Corbyn into power have agreed that the joke hasn’t even begun to stop being funny yet.

Spectator columnist Tom Booker said: “I giggled myself silly when Corbyn got elected, but this is real-world satire and the true hilarity is still to come.

“I’ve persuaded several billionaire friends to make enormous donations to Labour, just for the yuks, and for the next five years every one of my columns will fervently back the bearded one, all done completely deadpan and never letting the mask slip.

“Come the election I, and millions of other well-dressed professional canvassers, will be out knocking on doors pushing the Corbyn message to suburban families who wouldn’t give his usual fleece-clad scruffs the time of day.

“Their votes, combined with our own, will turn the blue heartlands red and deliver an absolutely side-splitting landslide majority enabling Corbyn to act on every element of his radical agenda.

“Then we sit back and enjoy the self-satisfied belly-laughs.” 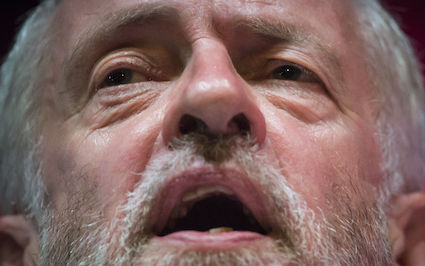 NEW Labour leader Jeremy Corbyn has given his acceptance speech dressed in a black leather uniform while flanked by armed henchmen.

The socialist demagogue gave a rousing speech, which frequently built to a crescendo of white-hot fury leaving the microphone flecked with spittle, as he set out the party’s future and the fate of anyone who dares oppose it.

Corbyn said: “This is Year Zero for the Labour party, and the beginning of my thousand-year rule.

“I already head an army of more than 600,000, who tonight march the streets in torchlight bearing the proud standard of my reign, sweeping all before them.

“By the election of 2020 – Britain’s last – every man, woman and child on these shores will be a Corbynite, or dead.

“Also, I hope to spark debate about the future provision of public services and how we can encourage small community-based enterprises.”

Corbyn’s rivals’ locations are unknown, apart from Liz Kendall who has safely reached New York and declared herself the Labour Party leader-in-exile.