VOTERS have got the feeling they have seen UKIP’s first MP somewhere before.

Douglas Carswell, who is rumoured to have a background in extreme right-wing politics, entered the House of Commons as if he already knew where he was going.

Conservative MP Julian Cook said: “The UKIP victory is a political revolution, but oddly I feel this chap’s always been around.

“It’s almost like I remember his face behind me in Parliamentary committees, on the backbenches and in bollockings for taking the piss about expenses.”

Carswell said: “I, and the party I represent, am a new and exciting force in British politics.

“Any MPs who need clarification are welcome to attend private meetings in my office, where I will stand behind you holding a machine that is definitely not a neural implanter.” 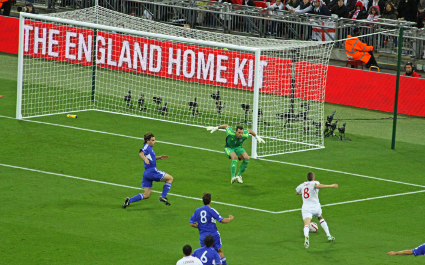 ENGLAND football manager Roy Hodgson has attacked San Marino for sneaking a professional onto the field.

Hodgson said that fielding midfielder Mirko Palazzi, who is neither a butcher or a postman but plays for Rimini in Italy’s Lega Pro Seconda Divisione, was against the spirit of the Euro qualifying match.

He continued: “I’d promised the lads this was an amusing walkover against amateurs, and then they’re confronted with this basic level of competence.

“When Jack Wilshire can’t get past a player who works full-time as a piano tuner, he comforts himself by imagining the man’s risen to the big occasion.

“But when he can’t get past a player with 82 appearances for teams in Italy’s Serie D, he knows he’s just shit.”

England’s Kieran Gibbs admitted asking opposing players if they can get him work in San Marino’s banking industry if this football thing keeps on not working out.