Voters to get WW2-style propaganda

BRITONS are to receive crude 1940s-style propaganda from the Conservative party.

Households will receive information on how their tax is spent in the form of a leaflet showing an ape-like skinhead wearing a baseball hat labelled BENEFITS CLAIMANT eating a large piece of pie with YOUR MONEY written on it.

David Cameron said: “It’s impossible to make an informed decision in the election if you don’t have the right information, such as knowing that voting Labour could give you syphilis.

“So to help voters understand issues such as Labour’s taxation plans, we are producing posters like ‘VOTE LABOUR, GET A THIEF!’, which depicts Ed Balls stealing an elderly couple’s savings while Ed Miliband creeps up behind them with an iron bar.”

Battle-weary soldiers dragged back to sofa 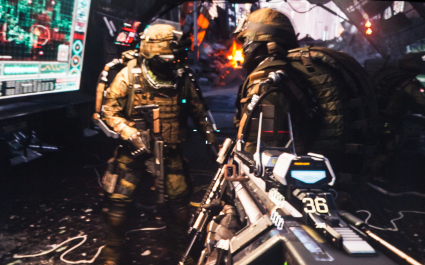 GAMERS around the world are reluctantly fulfilling their obligation to play the new entry in the Call of Duty franchise.

Call of Duty: Advanced Warfare, released yesterday, requires players to once again battle terrorists armed with nuclear weapons whether they want to or not.

Nathan Muir of Stirling said: “They told me it would be over quickly when I signed up in 2007.

“Instead, seven years later, I’m still shouldering the same old burdens in the same urban ruins with no prospect of escape.

“The dog needs walking and that gutter won’t last the winter but I’ve got responsibilities.”

Gamer Wayne Hayes said: “At first I told them no, I’m out. But then I realised I’m the only guy who can do this.

“People think it’s fun. How is mass slaughter in ruined cities where men live like rats to survive fun?

“Dying won’t end it. Death’s barely a bump in the road to me.”

The onerous chore of wiping out some global plot or other is expected to take about two weeks, after which players will continue mandatory shooting-each-other training every other evening.