We Only Bug The Brown Ones, Say Police

THE Metropolitan Police have assured beige members of parliament that they only bug the conversations of MPs who are either brown or 'brownish'.

Beige MPs from across the House of Commons expressed relief that it was only their deeply suspicious-looking brown colleagues who were having their privacy violated.

Denys Hatton, a Labour backbencher, said: "I know I speak for many of my beige colleagues when I say there is absolutely no need to bug me because I'm not up to anything."

A police spokesman stressed that suspect MPs were easy to spot as they fall within the 'danger zone' of the Home Office colour chart and often have foreign-sounding names.

The spokesman said the force deployed a 'simple and effective' three-point strategy for dealing with people who are either brown or 'brownish':

A) Bug them; B) Mess up their house at two o'clock in the morning; or C) shoot them in the face on their way to work.

He added: "The last thing we want to do is listen to ordinary, beige MPs asking their relatives if the money has arrived, or making appointments with male prostitutes named 'Fernando'." 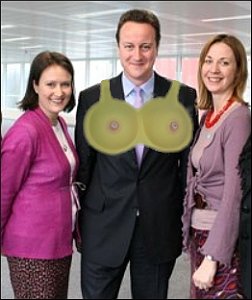 DAVID Cameron will wear a pair of strap-on breasts and visit every new mother in Britain under a new Tory breastfeeding initiative.

The Tory leader commissioned inventor James Dyson to build him a set of 36FF hydraulic breasts with a dual cyclone action and a centrifugal milk pump capable of feeding 40 babies an hour.

He will use the giant artificial bosom to suckle the nation’s infants while singing lullabies designed to encourage hard work, thrift and green living.

Mr Cameron said: “Milky breasts are not sexual playthings to be pawed at and ogled by perverts from Japan. Nor are they ‘fun-bags’ for men to place their heads between and go wibble, wibble, wibble.

“Breasts are the reason I joined this party.They are at the heart of a modern, caring Conservatism that believes in nipples and is relaxed and comfortable around these incredible glands and their wonderful life-giving secretions.”

Mr Cameron said he was sorry he could not provide his own ‘man milk’ to feed the infants and that he would use liquid pumped from the breasts of the mothers themselves, or from a tanker filled with formula provided by Unilever®.

He will also leave behind leaflets about some of Britain's best independent schools and advice about early actions every mother should take, such as putting the child down for Eton or Winchester.