Why all this is fine, by a Brexiter

BORIS? Doing a great job. Covid? Nothing to worry about. Brexit? Setting us free as a nation mate. Let me explain:

Food shortages? Sorry you won’t be able to get purple basil for your pancetta-wrapped sea bass. I take a limited diet of Wall’s sausages and oven chips which my triple-locked pension easily covers. Why do people keep complaining about things that don’t affect me?

I’m not afraid of some deadly virus. People accuse Leavers of burying their heads in the sand and using stupid analogies, but we got through the bubonic plague, didn’t we? And Vesuvius.

What people don’t realise is that literally nothing matters except Brexit. Boris may not be quite the panel-show Churchill I thought he was, and actually just a fat, spoilt parasite, but you’ve got to put it in the context of Polish shops. There’s one in the town 30 miles away where my sister lives. And I don’t like the sound of mosques.

Brexit will solve these and our many other problems, such as the French. Food supplies cut off? Bring back the Atlantic convoys. That went well and in any case we can easily grow our own food. Turnips are very nutritious.

The government is doing a fine job in difficult circumstances. Excuse me, my wife has just texted to say there are no Brussels sprouts in Tesco. Oh God, I think I’m having a panic attack.

The panic-buying bastard's guide to ruining it for everyone 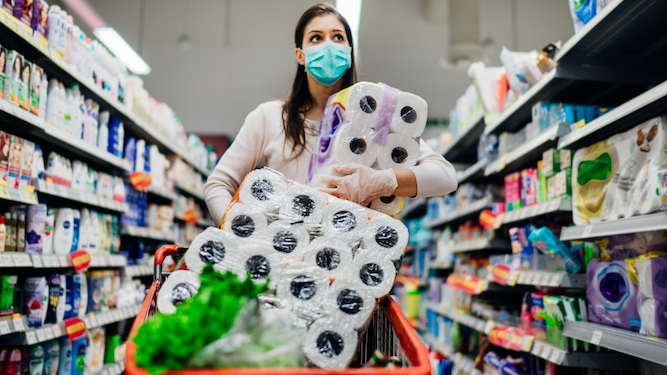 LOADING your garage with goods with no consideration for others? Here’s how to bugger up other people’s Christmases to the limit:

Your life will not be over if you don’t get bread sauce, but that’s not the attitude. Jostle, hassle and abuse people in a heaving mass of fellow shoppers until Asda resembles the fall of Saigon.

Only leave the crap booze

The drinks section should look as if it’s been ravaged by alcohol-hungry locusts. But leave the shit, so another harassed shopper will excitedly see a few last bottles of wine on the shelf, only to be crushed by disappointment as they realise it’s f**king Eisberg.

Not since spring have we been afraid to wipe our arses, so Christmas must not be about presents and pudding but the Boxing Day dump and the dwindling toilet paper reserves. Ideally whole families should have their enjoyment of Dunkirk ruined by holding one in.

Get four turkeys, just in case

Massively over-purchase any key Christmas item – if you’ve got enough gravy to last until 2030, that’s great because other people won’t be getting any. And isn’t that the reason for the season?

Tampons don’t go off, and it’s a real pain if there aren’t any, so buy lots. Toothpaste is pretty important too, so if you can afford it get 400 tubes. You’ll use it eventually, with what’s coming, or trade it for a hatful of stew in the bombed-out ruins of Buckingham Palace.

Fight in the supermarket

Be so fixated on that 90p Terry’s Chocolate Orange that you’ll trade punches with Captain Tom without balking. And if that four-year-old girl gets between you the last Baby Yoda, she knew the risk she was taking.