by Jeremy Corbyn, leader of the Labour party

HELLO. I’ve spent more than 30 years being right about absolutely everything and, in tomorrow’s general election, you have the chance of a lifetime to join me.

My supporters say I’m on the ‘right side of history’. I say that’s selling me short. From Live Aid to Iraq to Nasty Nick’s expulsion from Big Brother, I was on the right side of them all.

You’ll never be as right as me. Nobody can be. Even my children leave the room. But tomorrow you can claim your own small piece of my eternal righteousness by voting Labour.

Imagine the glow you’ll feel. Imagine the pride, in 30 years, you’ll have in telling your children that, when it came to the crunch, you did the right thing and voted Corbyn.

Nothing, and certainly not my inevitable loss, will ever take away from that feeling. So do the right thing tomorrow. Vote for Britain’s most decent and absolutely correct man. You deserve it. 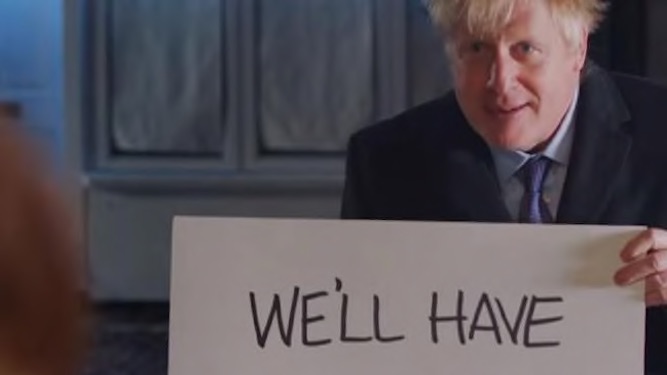 The Conservative leader’s political take on the much-despised Christmas classic is widely agreed to have made a scene everyone already hated far, far worse.

“As if this car crash of a Christmas election needed to be worse, that stupid-haired bastard has now combined it in the nation’s collective mind with that crappy, sentimental excuse for a festive film.

“His choice to act out the stalkery doorstep scene doesn’t surprise me, as he’s obviously the type of bloke that would use underhand tactics to chat up someone else’s wife whilst they weren’t looking.

“But it’s made me scared to open the door. What if it’s Boris Johnson who has personally turned up to force me into voting for the Conservatives with a mixture of emotional blackmail and outright lies written on boards?

“He’s turned it from a terrible romcom to a genuine horror. Though, Hugh Grant as prime minister? He’d shag you, but at least he’d use contraception.”