The Remainer's guide to saying 'I told you so'

DID you vote remain in 2016? Then now’s the time to be tragically smug about your prophecies of doom coming true. Here’s how to rub people’s noses in it:

Try to buy something that’s run out

Post-Brexit Britain has new and exciting shortages every week. One week toilet roll, the next petrol, the week after there are no cans of Fanta to be found. Reconnoiter the supermarket, find what’s not there, declare it the very thing you fancy and look puzzled at your Brexiter mates.

Remain lost in 2016 for a number of reasons, one of them being that they didn’t have a catchy slogan people could bellow on repeat. Make up for lost time by clearly shouting ‘I told you so’ at the top of your lungs while jabbing Brexiteers in the chest. This will undoubtedly win them round.

Yes, you lost. And yes, you knew Brexit would go this badly. But if you really want to remind people about your unheeded warnings, make sure you do it with a shit-eating grin on your face. Brexiteers will be confused that you’re so happy in defeat but at this point that’s all you’ve got.

Brexiteers hated being talked down to by unelected Brussels bureaucrats, so try to sound just like they used to. Go the extra mile and say ‘je te l’avais dit’ and leave them struggling to translate your sick burn.

Five years on, the country is still divided by the referendum. Help to keep it that way by being all high and mighty about your choice voting and making zero effort to find any common ground with Leavers. And no, a second referendum wouldn’t fix anything.

'How come you're working?' thick-as-shit family ask their waiter 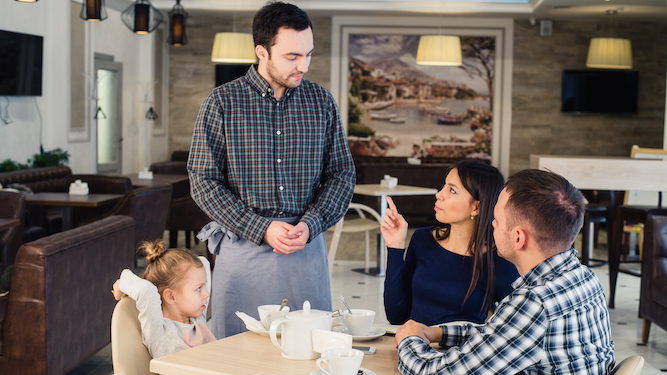 A FAMILY of morons out for a bank holiday meal have asked their waiter why he is working today with puzzled fascination.

The Bookers were making conversation with their waiter and asked why he was even there because everyone is meant to be off today, and were shocked to discover he has to be.

Dad Tom said: “I don’t get it. It’s a national public holiday but this guy’s supposed to carry on business as usual? It doesn’t add up.

“I asked him what gives and he gave this flat, lifeless laugh then asked if we’re having starters. It’s almost as if he thought I was being grimly ironic, or that I’m oblivious to something perfectly obvious.”

Wife Suzy added: “It makes sense that restaurants are open on bank holidays because there’s more footfall. But I don’t agree that the staff should work.

“In fact it’s unpatriotic. We’re all meant to be off today, even the banks, but he’s coming to work like there’s nothing special and it’s just another Monday? Where’s his national pride? I didn’t leave a tip.”

Waiter Oliver O’Connor said: “The worst part was when they assumed that I’m at least being paid double.”