We call her 'dickhead' to her face and she does nothing, cabinet confirms

THE cabinet have confirmed that they openly refer to Theresa May as ‘the dickhead’ in meetings and she acts like she has not heard.

Work and pensions minister Amber Rudd, speaking under conditions of strict anonymity, admitted that nobody has referred to May by name since December and the abuse is getting worse.

She said: “Normally when she starts on her ‘This is the only deal that honours the blah blah blah’ we just talk over her. Because why would you listen?

“Last week Jeremy Hunt was kicking a football around the cabinet meeting room. Then Michael Gove threw a glass of water in her face just to see if she’d react. She didn’t.

“It’s not even a big deal now when one of us says ‘shut the fuck up, cretin’ to her. It’s like saying ‘hello’.

“When she started to talk about the budget, Phil Hammond just covered her with pages of the Daily Telegraph until we couldn’t see her. It was terrible, but I laughed along with everyone else.

“There’s talk of bringing eggs and flour in today, which I’m uneasy about. But I won’t actually try to stop it and I’ll probably join in.” 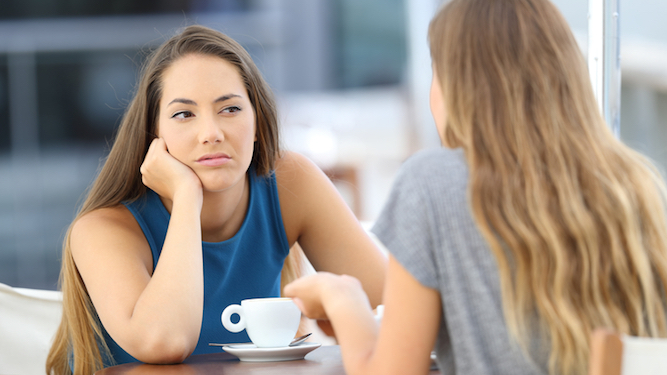 HAVE you got a friend who’s buying a house and won’t stop banging on about it? Here are some tactics to stop them droning on for a bit.

Your friend will go quiet if you tell them an entirely fictional story about someone who bought a £175,000 house that had a dangerous form of dry rot that rendered it worth £0.00.

If you really want to fuck with them invent a house that turned out to be inhabited by the ghost of a witch who eats people’s eyeballs in their sleep, causing them to wake up blind and screaming.

Buy a bigger house than them

Expensive, but instantly knocks them back if you start wanking on about getting a koi carp pond. Note: This may cause you to hate yourself forever.

Volunteer for a homeless charity

All but the most shameless house obsessive will have to stop talking about it if you ‘casually’ drop into the conversation something like:

“Yeah, I was talking to Bob, the ex-Para, the other night. Wounded in the Falklands and all he’s got to show for it is a sleeping bag and rheumatism. So what were you saying about needing somewhere to put your mountain bike?”

Your friend did not know that a quiet suburb of Chester had a massive gang problem, not to mention the fact that it’s a red light district and there are plans to build a huge meat rendering plant. They do now.

It’s entirely possible they are so obsessed with buying a house they absolutely will not shut up. Hit them over the head with a brick, for the irony.