What sort of 'Get Brexit done' b*llend are you?

DOES the idea of just ‘getting Brexit done’ make total sense to you? Read our guide to what sort of idiot you might be.

Moron who thinks everything is simple

We just need to knuckle down to Brexit and it’ll get done, like a big pile of washing up, right? You probably also think being a barrister is just knowing fancy words and making a film is just pointing a camera at things.

After three years of ranting about Brexit you’re in too deep and cannot lose face, like a Scientologist who’s just found out from Wikipedia that L Ron Hubbard made it all up.

Boris Johnson and his cronies

You don’t really believe Brexit is any good, and you may well lose interest in the whole thing after 12 December 2019. Until then you’ll happily claim that Britannia unchained will unleash the potential of our nation of heroic lions and other blather.

Gran who thinks it’s all ‘daft’

Many grans still resolutely refuse to find out anything about Brexit and go to their default setting, “They should just blimmin’ sort it out.” This is not adding a whole lot to the debate, grans.

Loony with other nutty beliefs

People with mad beliefs like Flat Earthers are ALWAYS into Brexit. Strangely this makes sense, because ignoring the complexities of leaving the EU is nothing compared to believing Mossad did 9/11 or your spiritualist church is in contact with spirits who strangely never just describe the afterlife clearly.

‘It’ll never happen to me’ pillock

A worrying number of voters are aware of the risks of Brexit but think only other people will lose their jobs. This puts you firmly in the category of the 80-a-day smoker who confidently says, “A lot of people don’t get cancer.” 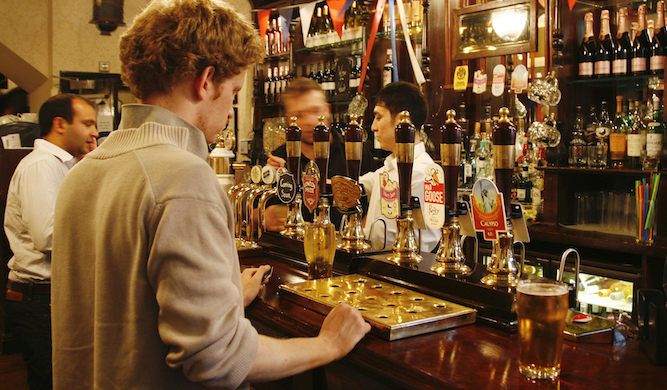 A NORTHERNER generously waived what he imagined would have been his change from £10 for a round in a Covent Garden pub.

Tom Logan, 36, believed a tenner would easily cover the cost of two pints of lager and two large glasses of Chardonnay, leaving a pleasing tip or drink for the grateful barmaid.

Logan said: “I was on a day trip down from Barnsley and got chatting to some folk at the bar, so I offered to get a round in.

“When I flashed a whole tenner around you could tell they were impressed. So I handed over the note to the barmaid and said, ‘Have a drink yourself, love.’

“Once the shock had worn off I realised I must have been the victim of one of them grifter scams and they were all in on it. I’m lucky I didn’t wake up in a dingy hotel room with a kidney missing.

“Naturally I scarpered. I’d have reported it to the police only they wouldn’t have believed me.”