Why it takes a serial incompetent to tackle incompetence, by Matt Hancock

RECENTLY I’ve noticed columnists saying it’s wrong to appoint useless people to important jobs. As someone with a long history of incompetence, let me explain why they’re wrong.

Have you ever heard the saying ‘It takes a thief to catch a thief’? Well, it’s the same with incompetence.

The new national health agency boss Dido Harding has a record of presiding over a data loss catastrophe at Talk Talk before overseeing a still more calamitous track and trace cock-up.

A slow-witted left winger would see this as proof that she shouldn’t be allowed to direct traffic at an NHS car park, let alone be given £10bn of public funds to play with.

What they are missing is that, unlike competent people, incompetents have frontline, real-life experience of dealing with absolute shitshows.

Shitshows of their own making, yes. But would you prefer executives who are good at their jobs, who have never have experienced massive foul-ups because things run smoothly under them?

‘That doesn’t make sense’, I hear you say. But I know what I’m talking about. I am one of the top incompetents in Britain, if not the world. World-beating incompetence, you might say.

Anyway, her husband and I belong to the same tennis club. 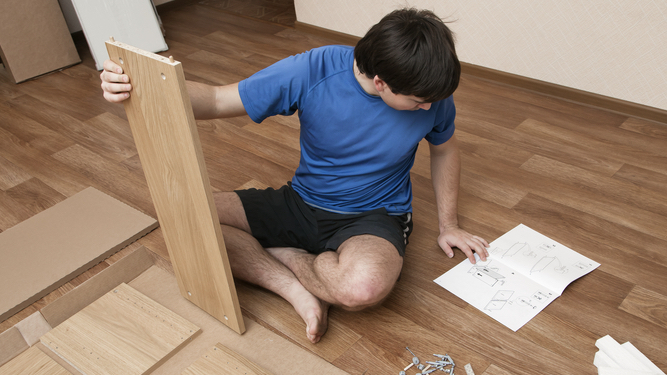 A MAN has somehow managed to construct a small piece of flatpack furniture using the instructions that came with it.

Tom Booker, who is not a professional carpenter or engineer, put together the wooden desk using a step-by-step guide provided by the manufacturer, assembling the item in a mere four hours.

Booker explained: “I bought the item off the website and it arrived in its box, not fully formed, but in all sorts of random bits.

“But I had no intention of giving up. Using all my strength and ingenuity I consulted the numbered list in the box, slotting the pieces of wood together and screwing them in with the equipment provided.

“A lesser man might have called a local tradesman or his dad, but I persevered on my own. I used everything I learned in Year 8 Woodwork to make this fantastic desk, all by myself.”

Booker plans to use his impressive construction to house his laptop and some biros, and now intends to pursue even more ambitious DIY projects, such as a small book case or spice rack.

He said: “I’ve really caught the bug. When you’ve got the natural flair of a brilliant civil engineer and a list of simple instructions a child could follow, you can achieve anything.”