Can I get paid for not working?

Not in the pure and wonderful way you have been all summer. Instead you’ll have to do at least a third of your usual hours. We know, right? You used to think Rishi was a good guy but he’s just one more bastard like all the rest.

Who pays for it?

Sadly not the UK taxpayer, ie. you but in a few years’ time. Only 22 per cent of your wages will come from the government now, with your employer paying the rest and the final amount only being 77 per cent of your pay. Which is fine because we can all lose a quarter of our pay without even noticing.

Only small and medium-sized companies. Larger ones get nothing unless their turnover has fallen, which is why Sir Philip Green has suddenly declared TopShop to be 300 coincidentally-named quirky independent boutiques.

Aren’t I going to get fired anyway next year?

Yes. But this way you’ll have a lovely Christmas, unless you’re in a care home, a student trapped in a hall of residence, an unpopular member of a family larger than six, or work in pantomime.

What about f**king theatres? Yes, they’re a far bigger part of the UK’s GDP than the fishermen we’re starting a war for, but actors are luvvies and they’re always putting on Marxist plays. F**k ‘em. They’ll make nice Wetherspoons. 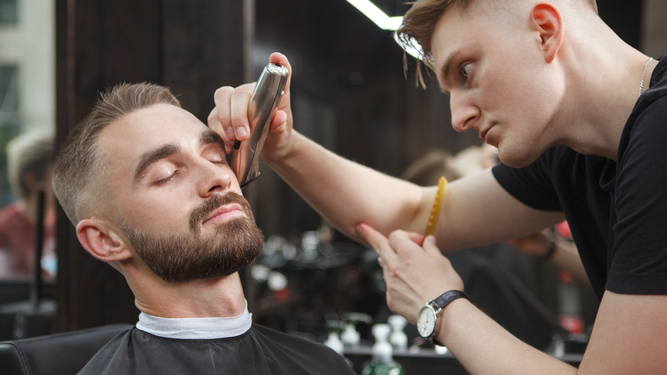 Pampered narcissist Julian Cook thought nothing of booking a trim, despite the fact that he has already had too many haircuts in the last nine months.

Cook’s barber Stephen Malley said: “He needed a load lopped off after lockdown, which was fair enough, but since then he’s been taking the piss by coming in regularly.

“It’s got to the point where I’m just idly running the clippers over his scalp while looking at my phone. I’m only buzzing off atoms of hair and I don’t even need to sweep up when I’m done.

“When I finish we go through the performance where I hold up the mirror and he tells me it looks good, even though I could’ve shaved ‘twat’ into the back of his head and he’d give it the thumbs up.

“I hope the R rate goes through the roof and there’s a second lockdown purely so I don’t have to see his preening face again for a few months.”

Cook said: “I used to get a haircut at least once a month because Christ knows what would happen if the shaved bits grew slightly. It doesn’t bear thinking about.”