Chuck your pint at the ceiling: the twat's guide to watching footy in the pub

TONIGHT’S the night. Been lucky enough to snag a table down your local boozer? Here’s how to ruin it for everyone else:

The staff would love to enjoy the game along with everyone else, so ruin their day by giving them the runaround with lots of picky, annoying requests. With any luck, they’ll miss a 30-yard screamer while they’re out back searching for a bottle of grenadine to make that Gin Daisy cocktail you’ve ordered, like a wanker.

Provide your own commentary

Spend the whole match talking non-stop to no one in particular. Punctuate your chat with groans, yells and a couple of startling high-pitched screams, as well as insightful observations like ‘He’s shit, that Pickford’ and ‘Isn’t Wembley massive?’ Fill any dead time by telling people on neighbouring tables that Gary Lineker gets paid £1.3m a year for doing f**k all.

If the menu says ‘Food served ’til 9pm’ it’s your right as a customer to order a full roast dinner at 8.59pm, especially as you’ll need something to soak up the nine pints of lager you’ve sunk. Also, feel free to aggressively ask anyone who orders ‘pro-Italian’ dishes like pizza or pasta why they hate this country.

If you were at Wembley, randomly breaking into snatches of Three Lions would be totally appropriate. Endlessly yelling it in a small pub full of people desperately trying to concentrate on a screen is not. For maximum annoyance, bellow a couple of choruses of Vindaloo during any tense free-kick moments.

This is England’s first major final in over 50 years, which means nothing is off limits. You might not be in a fan zone in Hyde Park on a balmy July evening, but it doesn’t mean you can’t throw your pint if England score. And if the landlord of The Royal Oak is left picking bits of glass out of the ceiling for the next four years, so be it. 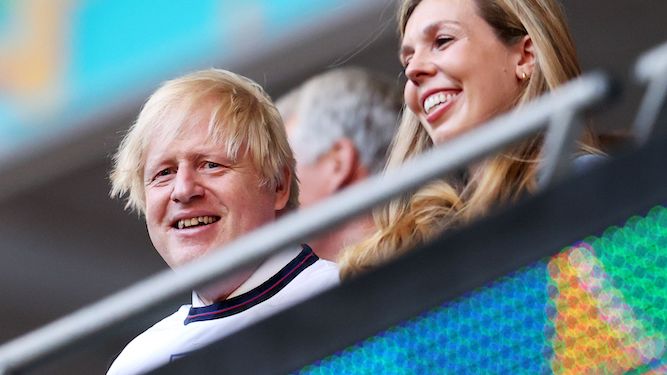 BORIS Johnson has popped in to give an impromptu, improvised, pig-ignorant talk to the England team. Here’s the transcript:

Gosh. Welcome all of you. Kane, Trippier. Rashford. Let’s draw a veil over last year’s unpleasantness. But those kids would have found food somewhere and you know it.

We boys have more in common than you might think. I’ve never had a proper job either, and I have my own WAG at home, blowing thousands on wallpaper that I’m f**king sick of.

Now, as I understand it, the game is to get the ball into the opponent’s goal. But there’s more to it than that. Let me introduce you to a thing Eton calls ‘gamesmanship’.

I notice that you only celebrate goals when you’ve actually scored them. Have you thought about celebrating a miss so enthusiastically you convince everyone it was actually a goal?

Or alternatively when you concede a penalty and look a chump, why not immediately start a hullabaloo about something else? A statue outside the ground or Meghan Markle?

And there’s no shame in losing. I lost two by-elections recently and didn’t care because the big one’s not until 2024. Likewise you may lose here and in Qatar, but you need to win in Germany in 2024 so I can ride the wave and get re-elected.

This game matters. There’s nothing closer to my heart than a politically-convenient cause I can back without any financial outlay.

So get out there and win it for England, and when I say England, I mean me. Jolly best of luck.