Five reasons why Sunday's final won't be 1966 with women

THE Lionesses are doing brilliantly, but the upcoming Euro 2022 final is hardly a repeat of 1966 with women. Here’s why.

It’s not a World Cup

Yes, Sunday’s match is a final. Yes, England is playing at Wembley Stadium. That’s where the superficial similarities end though. Everything else from the players to the competition to the trophy will be completely different. They’ll still be playing football though, so you can give the Lionesses that.

England only won the World Cup back in 1966 because the cameras were so poor they couldn’t verify a dodgy crossbar goal. Did the ball bounce over the line or not? We’ll never know. There’ll be no such luck for the Lionesses though as VAR will bring the game to a grinding halt to double-check dubious goals.

We’re playing against a team filled with members from the whole of bloody Germany. Just think how much talent they’ll have to draw from. Of course if we win that’ll make our victory all the sweeter. If we lose though then the Lionesses’ 15 minutes of fame will be over and dickheads will use it as proof that women are rubbish at football.

It’ll be in colour

Not only will the game not be broadcast in boring, flickering black and white, it’ll be in crisp HD. That’s unless you’re watching from the back of a crowded pub, in which case you’ll barely be able to see or hear anything over drunken crowds waving a big flag about. You’d be better off listening to it on the radio.

Probably the most obvious of all the glaring differences. Sunday’s match will be set 56 years after England triumphed against a different team and won a different tournament. This country’s come a long way since 1966, although in terms of clinging onto the past in order to feel better about itself, England hasn’t changed a bit.

Starmer sacks Angela Rayner's boyfriend so he can be her boyfriend 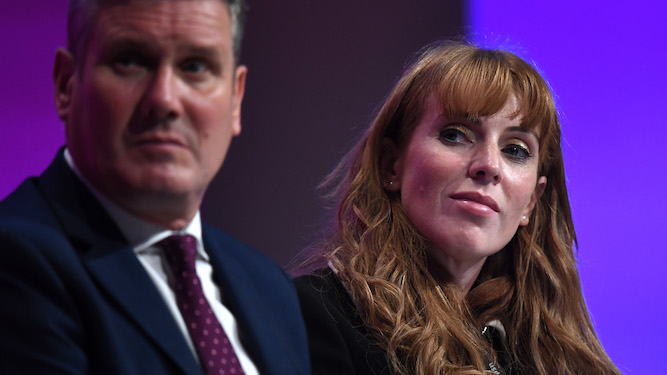 KEIR Starmer has sacked his deputy Angela Rayner’s boyfriend and suggested that perhaps he could step in on an acting basis.

The Labour leader dismissed Sam Tarry, shadow minister for buses, for un-Labour activities including supporting striking workers on a picket line, then offered to fill the vacancy in a dual role.

“So anyway, no room for loose cannons on my front bench. Everyone and everything needs to be tightly tied down. Which brings me to my next point.

“Obviously you can’t be romantically partnered with Sam anymore, since he’s not even a junior minister. But nor is it appropriate to have a single woman in my leadership team, so how about it?

“I’ll step in, steer the ship, I’m the captain while you’re my flame-haired consort beside me at the tiller, etcetera. Sharing a cabin below decks, all that. I’ve used metaphors here but I am proposing a full sexual relationship. Shall I put a tick in the box next to that?”

Rayner said: “This is the weirdest come-on I’ve ever received. And I work in Westminster. With the Tories.”