ENGLAND captain and striker Harry Kane is an ornamental flourish like the silver lady on the bonnet of a Rolls-Royce, Gareth Southgate has explained.

The manager has silenced calls to drop Kane for another striker by making clear that he is not in the team to score goals but as a living embodiment of everything great about English football.

Southgate continued: “Just look at him. Proud, upstanding, unquestionably British with a name like a Roy of the Rovers character. How can we not profit from his presence?

“That square jaw, that classic blonde hairline, the sheer dogged never-give-up Dunkirk spirit in his eyes. That’s why we play him up front, so the opposition know what they’re dealing with. Goals are irrelevant.

“His whole career is a fairytale. Like all the greats, he could move to a big club and win trophies but instead he loyally stays with his village team, Tottenham, even though he knows he’ll never win anything.

“Like the Spirit of Ecstasy on a Rolls, he heralds. He inspires. He personifies English football. Sterling can stick it in the net when necessary, he doesn’t mind hard work.”

Fan Nathan Muir said: “What a fantastic team we are, that we can afford just to carry a player. It’s like Beckham in 2002.”

1066 and six other historical events, as reported by GB News 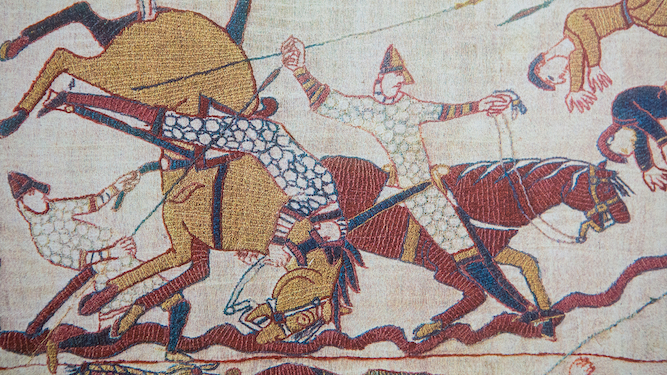 THE history we have is clearly biased reporting by the ivory-tower liberal elite. How would it be reported fairly and without prejudice by GB News?

In the build-up, relentlessly anti-French rhetoric leads to prominent merchants pulling advertising. Saved thanks to a crowdfunding campaign by serfs, Andrew O’Neill interviews William the Conqueror and immediately backs the Normans to the hilt as proven winners.

Instead of focusing on new freedoms granted by the document, GB News becomes obsessed with the obscure clause banning fishing weirs. The channel features a parade of illiterate, bigoted fisherman who want to tear up the document to ‘give us back our fish’. Also constantly calling Robin Hood a terrorist.

GB News questions the actual numbers of infections and whether quarantine measures are necessary, and attacks the lefty luvvies who have fled London for the picturesque hamlet of Basingstoke leaving ‘ordinary working people’ to bear the brunt.

O’Neill and dickheads from Thee Spectator manage to simultaneously disparage children for having spinning tops which beguile the mind to sin, while despising them for carelessly losing fingers and limbs in shuttle looms and slowing production. It does not believe these positions contradictory.

A GB News reporter interviews a trio of inebriated soldiers in Trafalgar Square about their feelings as war in Europe ends. It’s all going well until the sozzled squaddies give their names as Bombardier Hugh Janus, Sergeant Mike Hunt and Private Phil McCracken.

GB News buys full rights to the coverage, then screens the match with right-wing commentators moaning about how football has got worse since Stanely Matthew’s day. ‘Look at those haircuts, you’d never catch Nat Lofthouse looking like that’ and ‘him who didn’t score is unmarried, you know’.

Treated like a Royal death. Black-framed screens, sombre music, weeping and calls for a military coup.