John Inverdale's Who Would You Rather?

YOU join me at the BBC’s post-Wimbledon black tie dinner, where once again I must make some of the toughest calls in sport. So without further ado, let’s look around this sea of faces and ask Who Would You Rather?

Gun to my head? Let’s see, Sue scrubs up well and, from what I can ascertain, appears to be no stranger to a Ladyshave. Judy is Scottish so she’s probably a bit more feral down there, sporran style. And in a certain light she looks like Andy. Sue seems lower maintenance – she’d probably bring you some grapefruit afterwards as well. No contest: it’s Sue.

And there! It’s Rebecca Addlington and Colleen Rooney.

Becky’s a sweetheart but you need to know you’ll win the post-coital arm wrestling contest – otherwise what’s the point? And it’s all very well having that infectious smile brightening up the boudoir, but when it’s beaming down on you as you’re being pinned to the pillow with your knees behind your ears, it’s not quite so lovely. Colleen, weakened by the rigours of childbirth, is the safer bet.

Now here’s a tricky one: emerging from the gents, it’s Becker and Henman. No, I must choose – the fate of the universe depends on it.

Deep down, you know Boris would enjoy it too much. Then you’d have to deal with him constantly flashing his sock suspenders at you when you’re trying to conduct serious interviews for the BBC. At least with Henman, you’d know he was only doing it to save the universe and your tears would mingle in the All English way. It’d be pretty special.

And look! Posing for photos by the fondue, it’s our two champions, Murray and Bartoli!

Hmm, this one’s a toughy. There’s Bartoli all squeezed into a black latex bin bag dress, probably loaned to her by Boris Becker. No woman goes out looking like that unless they’re angling for post-championship pity action. Sorry, Bartoli, but nothing’s less alluring than a sure thing. At least with Andy you get the thrill of the chase. His countrymen might jocularly liken his tiny face to a ‘well skelped erse’, but everyone wants a piece of Murray now so you’d be a fool to refuse him. Hands down: it’s Andy. 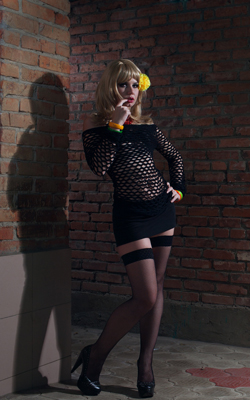 THE latest game in the Grand Theft Auto series will allow players to pay women for sex and then deal with complex feelings of shame.

New in-game footage shows a player picking up a street-walker, performing sex acts behind a skip full of rubble and broken printer parts, then sitting alone in their car weeping.

The sophisticated game engine stops players from functioning normally in relationships while a Lust meter creeps up and sends them back to the prostitutes to begin the cycle again.

A spokesman for GTA developers Rockstar said: Weve used the latest motion capture technology so you can really see the thinly-veiled disgust on the hookers face as she has sex with you.

This is followed by a slo-mo sequence where your expression collapses from momentary euphoria into profound self-loathing, all to the soundtrack of 50 Cents P.I.M.P.

Weve chucked out all the stuff about racing cars, robbing banks and shooting the police, because when did you ever hear a gamer talk about that shit?

Players can still kill prostitutes, but that kicks off a creeping insanity subgame which replaces every character model in the game with the victims bloodied face.

“It eventually disables all movement controls except ‘curl into a ball and scream’.