WOMEN, eh? Can’t be left alone with ‘em, can’t honestly believe that coaching them in football is worthwhile. Here’s my guide to the fairer sex:

You can almost always identify a woman by sight once you know what to look for, but if in doubt don’t be afraid to ask. After all, they know better than you do!

Certain sexist players divide women into three types: WAGs, slags and other. But I have learned that the ‘other’ category actually has several subdivisions in itself, perhaps as many as 16.

Scientists have proven that women do not experience friendship like we do, being unable to physically withstand banter. Instead they form bonds based on crying and/or urination. Respect that.

Never run at a woman. Trust me on this. Even in controlled conditions in the grounds of my estate it has not once worked.

When trying to think like a woman, I have a rule: WWDB07D? or What Would David Beckham Do? Because Becks’s thought process, being driven by the twin engines of vanity and greed, is very like those of a woman, and so is his wife’s.

Normally you’ll encounter women singly, or in pairs, but in larger groups their behaviour can be less predictable or even dangerous. To this end I’ll be training the squad in groups of three and forbidding them to meet.

Don’t let them see Gary or any photos of Gary, even as punishment. Honestly it isn’t worth it. They’ll be shaking for days. 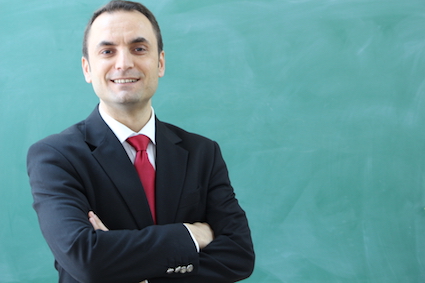 A SCHOOL is investigating a teacher who said he ‘learns more from the kids’ than they do from him, amid fears he is completely unqualified.

Tom Logan, who claims to be a history teacher, caused alarm at a recent parent-teacher evening by saying, ‘I like to think the children are the real teachers’.

Mother-of-two, Emma Bradford, said: “When my son James isn’t trying to eat food through his nose to see if it tastes different, his main hobby is running round in a circle until he falls over.

“He has no teaching experience at all, apart from the time he taught his sister a song he wrote called ‘You are a fart’. It was one line and it didn’t have a tune.

At a personnel hearing, Logan was asked to explain exactly what the children had been teaching him that was more important than the Great Reform Act or the origins of the First World War.

Logan said: “I just think they’re really wise”, before being told to leave and never come back.