SIR Alex Fergusons new book has revealed that United failed to win even the League Cup during his 26 years in charge.

Fergie’s autobiography exposes Manchester United’s claim to have won 13 Premier League and two Champion’s League titles as the result of “everyone getting a bit carried away.”

Ferguson, who admitted falling asleep during the clubs only European game in the last 20 years because hed driven the bus overnight to Tromsø, blames its erroneous record on media exaggeration.

He said: I do like to play the old mind games and on occasion the press has got overexcited and printed things that werent entirely accurate, for example in 1999 when they said wed won the Treble.

I should really have corrected them, but as far as Im concerned getting to the FA Cup final is achievement enough for this club and we deserved that open-top bus parade.

He added: “If we’d ever got the big players like Andy Cole or Rio Ferdinand, then maybe I’d be writing this as a title-winning manager.

“But there’s no shame in steering a club like United through a quarter-century and only getting relegated twice. That, not the relentless quest for glory, is what English football is all about.

Fergusons memoir will share shelves in bookshops with the new autobiography by Harry Redknapp, How I Won Every Trophy In The English Game And Scored The Winning Goal In The World Cup Final.

Tesco throwing away four cans of lager per year 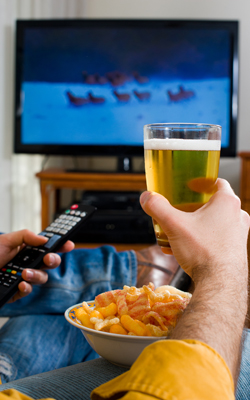 BRITISH branches of Tesco throw away a fivers worth of alcohol every year, they have confirmed.

Although each store discards tons of fresh bread, fruit and vegetables, staff cannot remember the last time booze stayed on the shelf more than a week.

Branch manager Tom Logan said: Were shovelling rotten salad into the skip every night, but a can of Stella hasn’t gone past its ‘drink by’ date since the last but one Labour government.

Theyre usually queuing up to meet the delivery van on a Friday afternoon before it even reaches the shelves.

“I did once chuck a four-pack of Foster’s away but only because I caught a customer licking it.”

Plumber Roy Hobbs said: “If these shops are serious about cutting waste they should start soaking out-of-date salad bags in vodka.

“I’ve tried it and home and the results are very tangy, it’s salad for grown-ups.”

“I need to get home immediately.