Everyone to be given a lump of uranium

DAVID Cameron is to reduce energy prices by giving every household a lump of radioactive material.

The unstable isotope will be delivered by Parcelforce along with instructions on how to make a home fission reactor and a self-assembly kit.

Householders will be permitted to turn conservatories into nuclear power plants without planning permission, provided the cooling towers are no more than 200 feet tall.

Father-of-two Stephen Malley has been given a chunk of uranium as part of a pilot scheme: “I’m into brewing my own beer and keeping bees. I suppose generating your own nuclear energy isn’t much different.

“Also having the reactor in the shed means that the wife and kids can’t come in because of ‘contamination risk’ which means I stay in here all weekend smoking fags.”

Malley’s wife Nikki said: “At first it was worrying because the kids kept taking the uranium into the garden to play ‘nuclear catch’.

“I do have safety reservations but if the neighbours, who I’ve never trusted, are going be technically a nuclear power then I think we should be too.

Carlisle taxi driver Wayne Hayes said: Im going to put mine in the fuel tank of my cab which Im fairly confident will turn it into some kind of time machine.

Obviously punctuality is a big deal in my job so the option of going back in time to avoid a congested route would be a huge boon.” 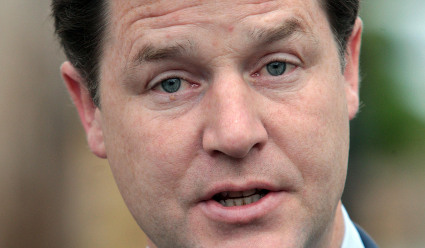 NICK Clegg is to break away from the Liberal Democrats to form a party called Nick.

After everyone disagreed with his ideas about free schools, Clegg announced plans to work out of a room above a Westminster pub.

The partys emblem is a hand tossing a coin to represent its decision-making process, with the slogan Nick  Guess What Happens Next.

Clegg has asked the Tories and the Lib Dems to form a three-way coalition until the next election, where he anticipates being the majority party after everyone in the country flocks to live in Sheffield Hallam so he can be their MP.

A Westminster insider said: Hes been to Prontaprint to get new cards made up and everything, bless him.