All life merely a figment of Leicester fan's imagination

ALL of human existence is the dream of a Leicester City fan and will expire the moment he wakes up.

Foxes fan Nathan Muir fell asleep several hours ago after finishing a bottle of wine and began enjoying a nocturnal, Roy Of The Rovers-type fantasy that his inexpensively assembled team mounted an astonishing challenge for the League title.

A sombre President Barack Obama said: “This is the greatest challenge humanity has ever faced. We may be only hours away from complete extinction.

“For too long we have failed to acknowledge that a world in which Jamie Vardy was top scorer in the Premier League could not possibly be real in any way.

“We must work together to find some way of keeping Nathan Muir asleep so as to prolong our own existence. We must avoid any sudden noises which might wake him up.” 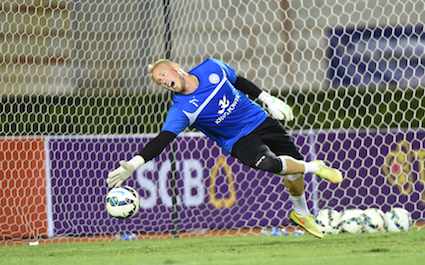 The weekend, which will include please God a trip to a National Trust property, just one win a film on Saturday night and don’t let me down perhaps a bit of football on the telly on Sunday, will be uneventful in every aaaaaaaaaaargh way.

Steve said: “We’ve got nothing really planned for this weekend except the possible fulfilment of a dream I’ve nurtured for four decades, ever since I was a small boy, so it’s going to be a relaxed one.

“I’ll probably go through the motions of being an outwardly normal human being while inside being a seething mass of torment laser-focused on 90 minutes on Sunday afternoon.

“Things will pass in front of my eyes and words will leave my lips, but I will not see them and I will be unaware I am saying them because Leicester. Leicester could. Leicester.”

Malley confirmed that if one more win Leicester do not triumph one more win this weekend, he will continue in this one more win manner until Sunday, May oh God what if they lose all three games I should never have allowed myself to hope 15th.