SEPP Blatter has confirmed he has quite tremendously huge testicles.

The FIFA president placed the twin distended spheres on a dais, to the spontaneous applause of paid supporters, and said he must remain in post simply to do them justice.

Blatter said: “Do these look like the joy-onions of a quitter to you?

“Corruption in FIFA? These gigantic plums prove that I knew nothing of it and that I am delighted it’s being rooted out so my reign of unimpeachable honesty can continue.

“Did you see them swell when I said that?”

UEFA president Michel Platini said: “I went to his office to demand his resignation, and he just held up his hand and bade me watch the small objects – an ashtray, car keys, a small statue of Ronaldo – orbiting slowly around his vast gonads.

“How can we stand against them? They will crush us all.”

Blatter added: “When I’m re-elected – not if, when – this afternoon, I will confirm that the 2026 World Cup will be held in North Korea for reasons that are none of your business.

“Who would dare? A guy packing these bad boys, that’s who.” 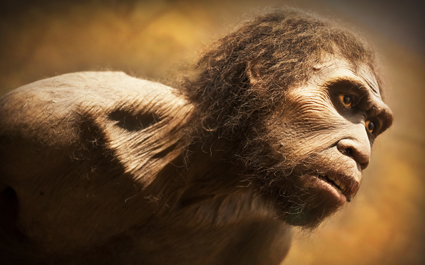 ARCHAEOLOGISTS have unearthed bones of man’s first annoying relatives, who were always turning up at his cave on weekends.

Scientist Mary Fisher said: “This species made a big deal out of being related to man, and was always inviting itself around for meals.

“Early man would hide in the recesses of his cave home, pretending to be fixing an axe or something, but Australopithecus would not take the hint.”

Fisher described how early man’s wife would be polite to the hominid and his annoying partner, because ‘they are family after all’.

She said: “Early man would be like ‘why won’t they just fuck off, we’ve got nothing in common’, while his cave-wife would be more diplomatic, partly because she felt sorry for them.

“Then she’d be like ‘I told them we’d go round for some meat at giant-wolf-eats-the-moon time next Tuesday’ and early man would go mental.

“Australopithecus had an inferiority complex about being less evolved which meant he was always showing off his expensive new spears.”