BRADFORD City celebrated its 5-0 thrashing yesterday by comparing its season to Arsenals.

As the Yorkshire club was battered like its supporters average dinner, the players reflected on the fact that at least none of them were or ever will be Gervinho.

Manager Phil Parkinson said: Even as the fifth goal whizzed past our keeper I turned to my assistant and said Piers Morgan doesnt support us. Never forget that.

“The supporters we do have were actually audible, didnt need prostitution to afford their season ticket and were sat at Wembley watching their side compete, to some degree, in a cup final.”

Bradford fans will spend the rest of the season not watching their ex-players win league and European titles, although they conceded they do still have George Galloway as their MP.

Meanwhile, Brendan Rodgers told Swansea fans they are very welcome for their victory after taking all the credit for it.

Speaking in front of a large whiteboard filled with incomprehensible quadratic equations, the Liverpool manager credited his mastery of Chaos Theory for each of Swanseas five goals.

Rodgers said: The ink I used in my resignation from Swansea was made by the left bladder of the male Two-Spot octopus.

“The eddies of causality this sent out into the universe ensured a Swansea victory just as surely as a butterfly beating its wings in China is the reason Joe Allen cant currently pass for shit. 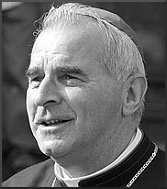 CARDINAL Keith O’Brien’s ferocious hatred of gay marriage may actually be rather sweet and sad, it has been confirmed.

As Britain’s biggest catholic was accused of being ‘inappropriate’ with priests, experts said that if you did not see this coming you have spent the last five years on a tiny South Pacific island after surviving a shipwreck.

Martin Bishop, a very nice gay man, said: “I can’t decide whether I want to give him a cuddle or a good talking to and then a cuddle.

“He’ll try to pull away at first and call me horrible names, but I’ll hold on to him very tightly and then eventually he’ll just give in and let himself be cuddled.

“And I’ll say to him, ‘if God thinks you’re wrong then he wasn’t really your friend anyway’.”

Psychologist Jane Thompson said: “Which came first – the inappropriate chicken or the egg that’s ashamed of itself?

“Think of this poor man reading an article about a gay couple then proclaiming they were ‘abhorrent’ while all the time he’s thinking, ‘Christ, they look fantastic together’.

“Catholic guilt is amazing stuff. You could use it to clean an oven.”