LIVERPOOL FC manager Brendan Rodgers has announced that he is sacking the club after yet another disappointing season.

The manager made his decision after the team’s abysmal 1-0 defeat to Hull City which condemns them to yet another season of European football on ITV4.

Rodgers had warned the club that if they dropped points against Hull they would face grave consequences.

In an official statement, he said: “I would like to place on record my thanks for all the hard work put in by Liverpool FC during their tenure under me.

“However, it has become clear that as they do not have the calibre required of a Brendan Rodgers club and it is with deep regret that I must let them go. I wish them all the best for the future.”

There were tearful scenes as the club cleared its desk, looked around Anfield for the last time and strode out into the car park to an uncertain future. It is thought that they might try their luck in the American MLS league as the Liverpool Lassoes.

Meanwhile, Arsenal, Manchester United and Manchester City are among the frontrunners to take their place under Brendan Rodgers. 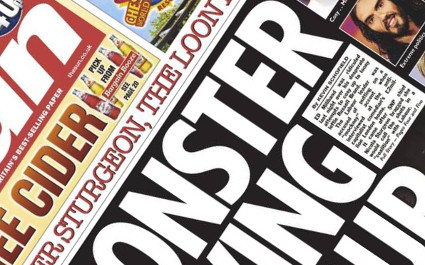 A REGULAR Sun reader suspects the newspaper is using subliminal messages to try and influence his political views.

Wayne Hayes, from Stevenage, has found himself voicing political views he never knew he held and believes the paper could be to blame.

He said: “Whatever they’re doing, it’s subtle. I almost didn’t catch it.

“Maybe it’s an acrostic, where the initial letter of every word spells out a message about Ed Miliband’s inexperience with the economy.

Sun journalist Nathan Muir said: “If the newspaper is using subliminal stimuli techniques developed by the CIA’s Black Ops division, I’m as much a victim as anybody.

“I constantly find myself bigging up the Tories as if I was controlled by a sinister foreign tycoon with an unquenchable thirst for money.”

Meanwhile, Bill McKay, a Sun reader from Edinburgh, said: “This morning I’ve suddenly decided to vote SNP. Maybe if you stare at breasts for long enough you become a nationalist. How fascinating.”