WITH the Premier League season about to climax over the nation’s grateful visage, one’s thoughts turn to those for whomst shame and sorrow will become constant companions.

BLACKBURN ROVERS
A fact known only to cognoscenti is that the radio disc jockey Tony Blackburn is a remarkably accomplished experimental landscape artist and mezzo soprano. I recall a soiree in Francis Bacon’s Soho rooms back in 1968 in which Mr Blackburn composed a gestural abstraction of St Paul’s cathedral using the medium of his own urine whilst accompanying himself with an a capella version of You Can’t Hurry Love.

WOLVERHAMPTON WANDERERS
The sharply contasting shades of the peripatetic Wolverhamptonites puts one in mind of Whistler’s Nocturne In Black and Gold of 1875, inasmuch as the public have rejected both of their endeavours as being a crude assault on the senses. Whereas the latter was dismissed by John Ruskin as a pot of paint flung in the public’s face, the former has been Karl Henry’s size 12 boot flung into the kneecaps of the opposition. Their only saving grace is that the primal Mick McCarthy looks remarkably like an animated Easter Island statue.

BIRMINGHAM CITY
Often called the Venice of The North by those who believe La Serenissima is half a billion tons of concrete hastily shat into a rusting septic tank, Birmingham holds little charm for the modern aesthete unless he is blind, deaf, has no sense of smell and the constitution required to survive on a diet of Balti. This team is commanded by an irascible Scot, if one may employ a tautology, and I have yet to find a use for Scotland, other than to buffer England from beefy Scandanavian marauders.

WIGAN ATHLETIC
Roberto Martinez should be lauded for encouraging his team to keep it on the deck, play the passing game and not resort to negative counter-attacking tactics. But they’re an absolute shambles in defence, their best players will be looking for a transfer regardless of their Premiership survival and if Martinez is to remain in charge  he’s going to need to inject a bit of grit into the squad. In addition ‘Athletic’ makes one think of the Greeks. How splendid.

BLACKPOOL
I had fallen asleep during a screening of Mozart’s little-known operetta The Saucy Panel Beaters Of La Mancha and rolling onto my
remote control caused Ian Holloway to suddenly appear on the screen. He
seemed a delightful creature, although one could hardly divine a single
word he was saying, and now my two poodles Bocaccio and Tate bark like
the dickens whenever they see him on the television. For this reason,
Blackpool are my favourites to avoid the drop. 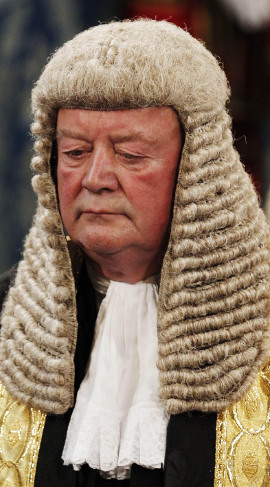 THE International Monetary Fund has promised Ken Clarke it will definitely give him a call about the vacant managing director’s position.

With the resignation of Gallic sex monkey Dominique Strauss-Kahn, Clarke had spotted an opportunity to escape British politics after describing date rape as ‘a bit saucy’.

With women and men who read calling for him to be sacked, the justice secretary fears his credibility may be damaged irreparably but believes international debt management would benefit from his broad minded approach to sex crime.

However, senior officials at the IMF suggested it may be unwise to replace Strauss-Kahn with someone who thinks his detention at  Riker’s Island is a tad harsh.

A source said: “Ordinarily Ken would be very near the top of the list. Very near. It’s just bad timing really. You can have an alleged sex offender, or you can have someone who thinks that sex offences are just a bit of tickle fun. But you can’t have one after the other.

“It’s not the Italian Monetary Fund.”

A friend of the justice secretary said: “No-one remembers but Ken was actually chancellor for a few years and unlike Gordon Brown he was quite good at it but unfortunately didn’t have a bunch of arse-felching hacks to write horseshit articles about his ‘genius’.

“He’d be really good at running the IMF. A Frenchman’s been doing it, so it’s not like it’s difficult. And the other great thing about Ken is that he’s really good at telling it like it is, even when it couldn’t possibly be more wrong.

“If only Cameron had put Ken at the Treasury and Osborne at justice then we’d have a chancellor who knows what he’s doing and a justice secretary who knows that sex crime begins at school.”

The friend also speculated as to why Clarke had suggested some rapes were cheekier than others.

“He’s a huge Dizzy Gillespie fan but he’s not very street wise so I think he may have felt some empathy for sex offenders when he was told that a lot of them are obsessed with jazz mags.”