EVERYBODY in England completely failed to care yesterday as Chelsea clinched the Premier League title.

As Ian Ancelotti’s side thrashed Wigan 8-0, football enthusiasts watched some programme about endangered rhinos on the Discovery Channel, including Chelsea supporters who had forgotten their team were actually playing.

Inexplicable celebrity Tim Lovejoy said: “The lads have done really well, according to what my personal assistant told me.

“Well done to all those men that play for my team, whatever their names are.”

Footballogist Charlie Reeves stressed that Chelsea occupy a unique position in the national game in that nobody likes them, including every single one of their own fans.

He said: “Twenty years ago, their home crowds were so sparse they had to shout their racist filth really loudly to ensure the bloke next to them heard it properly.

“The stadium is now much busier, but it is mainly stockbrokers using their season ticket as some sort of tax dodge.”

Meanwhile lifelong Blues fan Tom Logan said: “I suppose Chelsea winning the league is a bit like a woman in China giving birth to a daughter – nine months of hard work and expectation followed by an overwhelming sense of utter pointlessness.

“I expect they’ll either have the trophy adopted by a gay couple or dump it in a ditch.” 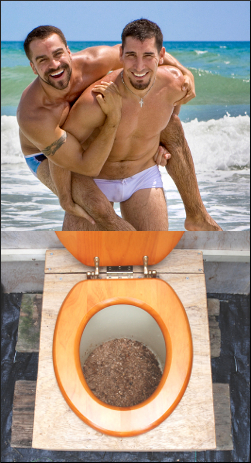 CONSERVATIVE MPs will be forced to have at least one gay friend each and install a filthy stone age toilet in their homes under any coalition deal with the Liberal Democrats.

With the two parties edging towards an agreement, Lib Dem sources say the Tories must demonstrate their commitment to progressive values by having lunch every day with an absurdly flamboyant gay man who will litter the conversation with repulsive double entendres.

One senior Lib Dem said: “Nothing will change the out-dated attitudes of a traditional Tory MP more effectively than a make-up artist called Simon using ‘toad in the hole’ as a rather obvious code for boisterous sodomy.

“Once a week they must go shopping together and the Tory MP will have to stand silently in front of a full length mirror while Simon drapes a feather boa around his shoulders and then tops it off with a cheeky little hat.”

The source added: “And to demonstrate their commitment to the green economy they must then go home and deposit their toad in the hole into the Dung-o-matic 3000, which I can assure you smells at least 3000 times worse than it sounds.”

Party leader Nick Clegg is also pushing for all Tory MPs to house a convicted paedophile in their garden sheds as part of the Lib Dem plan to release only the 5000 most dangerous perverts from Britain’s jails.

Meanwhile the Tories are attempting to impose strict conditions on the Lib Dems by forcing them to accept a metallic grey chauffeur-driven Jaguar instead of their preferred option of ‘burnt amber’.

Tory backbencher Denys Finch-Hatton said: “What if he tries to kiss me? And if he sends me a photograph of a naked willy am I supposed to say that I like it? Oh God.”

He added: “To be honest I’d rather accept PR and watch the Conservative Party die on its knees than turn up to the golf club with some day-glo ponce mincing along behind me. That said, I am somewhat intrigued by the manky stone age shit-box.”

As the Clegg-Cameron talks continue the Labour Party has made a fresh overture to the Lib Dems by re-enacting Weekend at Bernie’s with Peter Mandelson and Alistair Campbell putting a pair of sunglasses on Gordon Brown and taking him to the beach.

But sources said the chances of a deal receded dramatically after the prime minister failed to react when a stray volley ball hit him right in the nuts.