MANCHESTER City may still manage to utterly ruin their fans’ summer after losing to a team costing less than Mario Balotelli’s firework holster.

The world’s most expensive Panini album had topped the table going into the match, leading to growing concerns that thousands of Mancunians may have to allow joy into their lives for the first time in three generations.

The Samaritans had set up specialist happiness counsellors to answer fans’ questions about why their mouths felt all weird.

But manager Roberto Mancini said: “With the increased money in the club there’s the opportunity to raise people’s hope to all-new heights before flinging them off a cliff.

“When the team starts awful, continues to be awful and finishes awful, it can be very difficult to raise more than 35,000 resigned shrugs, but a genuine shot at the league being derailed by a team supported by orcs is spectacularly soul-destroying.”

The Italian vowed to fight Manchester United for the title until the end of the season in the absolute knowledge this would kindle the last flickering flames of the fans’ optimism only for it to be drenched by the fire extinguisher of Sir Alex Ferguson’s bastardry.

Lifelong fan Roy Hobbs said: “When a bloke who wasn’t good enough to play for West Brom headed the winner in the 83rd minute, I looked down at my eight year-old grandson’s his tear-sodden face and knew he was a true supporter for life.

Crosses 'help explain why someone is dreadful' 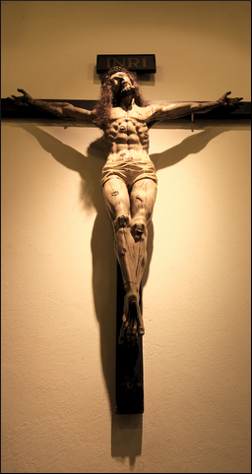 RELIGIOUS symbols in the workplace can help colleagues
and customers understand ghastliness, according to new research.

The Institute for Studies found the anger and frustration caused by dealing with dreadfulness is often compounded by not knowing why people are being so utterly hateful.

Professor Henry Brubaker said: “If you encounter someone who is incredibly uptight, judgemental, humourless and a bit thick it can all be terribly vexing, until you notice the cross.

“Then you can relax a bit because you have the measure of them. In many cases you may even be surprised at how reasonable they’re being.

But Professor Brubaker also stressed that Christians did have a valid argument when they pointed out that it is just a little cross.

He added: “If it was absolutely massive and they were nailed to it – or were trying to nail you to it – then we may be in a position of justified fuss-making.

“Meanwhile, the wearing of a tiny cross – much like the marriage of two gay people – gives a very strong reading on the no-one else’s fucking business-ometer.”