DAVID Beckham has admitted that his tattoos are visual substitutes for his complete lack of any short-term memory.

The star lost the ability to make new memories due to brain damage suffered when hit with a football boot kicked by a shadowy figure he only remembers as ‘the Purple Man’.

Beckham has the names of his children, the football clubs he’s played for, the trophies he’s won and the phrase “I just want to give something back to the fans,” inked permanently on his body in order to answer simple questions.

“One minute I’m in front of a camera in nothing but underpants, the next I’m holding an aftershave bottle that apparently contains my essence. None of it makes sense.

My tattoos tell me the big things and every Christmas there’s a new autobiography which fills in some of the blanks, but there are still so many unanswered questions.

Why did I leave the biggest club in the world to play in a country that doesnt even know what football is? Why have I got the haircut of Oswald Mosley? And how is it possible for me to be friends with Tom Cruise?

Associates of the footballer believe he is being manipulated by a sinister figure behind the scenes who is exploiting his goldfish memory to make money.

Beckham was unable to comment, but was seen holding a Polaroid photograph of a slim, purse-lipped brunette on the back of which was written: DONT BELIEVE HER LIES. SHE IS THE ONE. KILL HER. 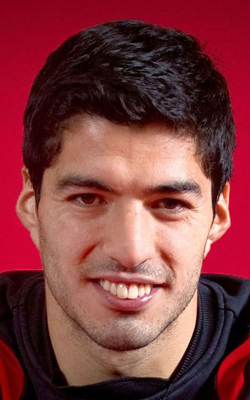 THE FA has confirmed that as of 7pm last night, kicking Luis Suarez is no longer a punishable offence.

The nibbly striker has been the cause of several bookings this season after players have kicked him, including yesterdays red card against Paulinho, which many supporters feel is against the spirit of the game.

FA spokesman Tom Logan said: Well keep it to just kicking him as hard as anyone likes for now but if he doesnt get the picture then well legalise biting him a bit as well.

The Uruguayan will appeal against the FAs ruling later this week but their lawyers have defended the decision on the basis they made it as a friendly, conciliatory gesture.

The FA will also send Suarez a basket of apples with a note asking how he likes them.

Similar previous measures have been used by the FA, such as the now-defunct 2002 ruling that required all references to Robbie Savage, both on and off the pitch, to be prefaced with the phrase that arsehole.

Match of the Day has supported the move, with the show launching a Hoofing Suarez in the nuts of the month’ competition.