Football reporting to be limited to upsets

THE media is to cease reporting football results that, like Chelsea beating Hull, are entirely expected by everyone.

“Events have transpired as expected”

The media has decided to stop wasting valuable pages and airtime on matches which unfold exactly as anyone would have predicted with only minor numerical variation.

Its the equivalent of a front-page headline alerting the readers to the prospect of rain at the weekend, which we dont do because were not the Daily Express.

From now on games which finish exactly as anyone would have guessed, like City beating Palace next weekend, will get a one line write-up on page 47, just under the English Kabaddi Federation finals.

Games between mediocre teams that are evenly matched, like United against Liverpool, will get two paragraphs next to the advert for hair loss cream and white vans.

Only matches with genuine surprises, like Spurs losing six-nil to Bradford Park Avenue, will get the full headline-and-photo treatment. And even then only the first time it happens.

Nil-nil games get no write-up at all, because nothing happened.

QPR fan Wayne Hayes said: Under this system Chelsea, who can be reasonably expected to win every game this season because everyone else is a bit shit, will become champions without it being reported in the press at all.

The Missing finale reveals kid was in Narnia 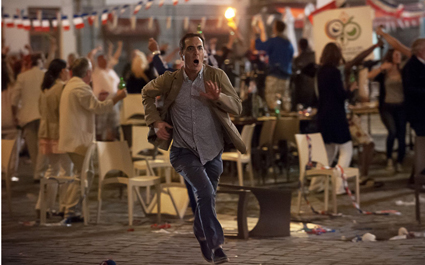 CHILD abduction drama The Missing is a prequel to the next Narnia series, it has emerged.

Viewers had braced themselves for the sight of James Nesbitt weeping next to a tiny unmarked grave, only for his absent son to emerge from a cupboard with tales of talking animals and fauns.

Fan Nikki Hollis said: “I was ready for the darkest gloomfest, in fact I was perversely looking forward to that, when suddenly up pops the kid saying how he’d had an adventure in Narnia with an otter called Mr Pixit.

“Then to prove it he pulled out a magical crown that made a normal apple into a toffee apple.

“James Nesbitt was so relieved he didn’t even give him a bollocking.

“Not sure how I feel about it all really. It’s bold but when I watch the final episode of a crime drama I generally want it to put me on a massive downer for several days.”