Hamilton Lost Because He Was Black, Claim Geneticists

LEADING geneticists last night claimed that Lewis Hamilton failed to secure glory in Brazil because he does not possess the key Formula One World Champion gene. Nobel prize winner James Watson said Hamilton did incredibly well for a black man but stressed that his greatest opponent was not McLaren team-mate Fernando Alonso but four billion years of genetic evolution.

Watson added: "The thing is, they're not really supposed to drive. Don't get me wrong, they're very good at running or making rudimentary canoes or farming equipment.

"But genetically-speaking the semi-automatic gearbox is beyond them, at the world championship-winning level at any rate."

Watson stressed that the strongest Formula One genes were to be found in the Finns and the Brazilians.

"Genetically-speaking Michael Schumacher must have had either Finnish or Brazilian lineage, though his German genes express themselves strongly in his insatiable appetite for world domination.

"I am certain that Fernando Alonso possesses some Brazilian genes but ultimately he will be held back, in a genetic sense, by his inherent Spanish laziness and his desire to kill defenceless bulls."

He added: "The Finns ability to drive so well is particularly impressive as, genetically-speaking, they're all such appalling drunkards."

But Watson's claims were rejected by the leading British scientific institutions.

A spokesman for the Royal Society said: "We prefer the far more robust argument that Professor Watson's half-baked genetic theories allow people to be racist at dinner parties."

He added: "No doubt Professor Watson believes I'm genetically predisposed to say that."

Meanwhile Sunday's failure has seen Hamilton go from the dazzling young superstar who transcends race to being simply the latest black man to let Britain down.

Terminator Was So Gay, Reveals Schwarzenegger 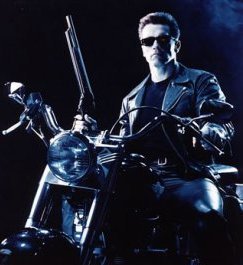 THE indestructible robot assassin from the future, portrayed by Arnold Schwarzenegger, was tormented by his sexuality and the lost love of his youth, it has been revealed. I'll be back to sort out your nightmare wardrobe

The actor-turned-politician explained that the robot was reduced to an emotional shell after a failed romance with a blond, 19 year-old golf buggy.

Schwarzenneger said: "He is so tormented because everyone expects him to live up to the tough-guy, robot stereotype and either make love to women or dismember them with a chainsaw.

"If you watch the first film closely it's obvious that what he really wants to do is kill Sarah Connor as quickly as possible so that he can get back 2029, mix a jug of margaritas and really sort out his personal life.

"In the second film he moves beyond his 'kill-all-day, dance-all-night' phase and develops his nurturing instincts."

He added: "Terminator 3 is really the first big-budget Holywood movie to explore the emotional challenges faced by an indestructible lesbian robot."

Schwarzenegger also revealed that the Terminator's famous catchphrase, "I'll be back" was a last-minute change from, "I am what I am and what I am needs no excuses".