FRANK Lampard has reminded David Luiz of the ancient prophecy that proclaims him the One True Lord Of Stamford Bridge.

Luiz caused friction in the Chelsea dressing room by suggesting his team mates just were highly-paid members of staff that might need to do as they’re told for the six hours a week they’re in work.

But Lampard said: “David hasn’t been here long so I haven’t had the chance to show him the mystic Scroll Of Wilkins that says ‘The crown of Chelsea shall one day pass to he that can make late runs from midfield and hath a relative called Redknapp’ yet.”

“Mine will be a benevolent rule when I ascend to my rightful place at Abramovich’s right hand and I will not banish David by placing him on the transfer list.

“He can expect to play a few reserves matches against the likes of Stoke if he doesn’t button it, though.”

The Legend Of Lampard is a folk tale told around the physio tables of Stamford Bridge for decades, but has often been dismissed as a myth to scare youth players into training harder.

Football scholars have likened it to the works of Tolkien, with the section of the saga describing the pitched battles of the Chelsea Headhunters in the 70s bearing remarkable similarities to the battle scene against the cave troll in Lord Of The Rings.

Luiz said: “Frank keeps coming up to me in the changing rooms, trying to show me a mole on his arse that apparently looks like the Chelsea crest and frankly it’s beginning to freak me out a bit.”

“It can’t be helping the team’s morale that he keeps referring to John Terry as ‘The Usurper’.”

All we're trying to do is read your mind, says Google 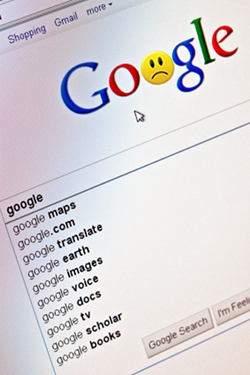 GOOGLE has insisted its new privacy policy is nothing more than a simplified method for collecting every last detail about you until it becomes you.

The big friendly search giant said it was baffled by an EU legal threat to its new privacy policy, claiming the changes would just make it much easier for it to know all that can be known.

The company said: “It’s especially unfortunate that this legal challenge has come from Europe. We really liked them. Particularly the one called Brian who seems to be based in the Stevenage area and spends most of his time sending angry, disgusting emails to his ex-wife and searching for ‘silk baby chimpanzee underwear’.”

Google added: “We have stated quite clearly that we do not do evil. It kind of feels as if you don’t trust us.

“All this time you’ve been happily using our search engine and our maps and those other things that don’t really work very well, while thinking we’re doing stuff behind your back. It really feels like you’ve been exploiting our good and loving heart.

“No, that’s fine, if that’s the way it is then maybe we just shouldn’t be your search engine any more.”

After a walk round the block during which it sat on a bench and stared at nothing, Google said it still loved you and that you could work it out if you could just find it within yourself to click on this little box and then forget about it forever.

“Don’t cry. Everything is going to be okay now.”