Following a fairly typical weekend for North East football, Newcastle fans were told to face-up to reality and change their lifestyle before they end up having the tallest stadium in the third division.

Dr Tom Logan, of the Institute for Studies, said: "It's a big problem across the North East. They spend money they don't have on things that are bad for them and eventually find themselves sitting in the pub wondering why they've just drawn 0-0 at home to Yeovil."

Despite spending hundreds of millions of pounds the three North East clubs have not won a major trophy since Sunderland lifted the FA Cup in 1973. Middlesbrough's 2004 Wembley triumph was quashed last year under the League Cups Obviously Don't Count rule.

Dr Logan added: "They need to stop chasing impossible dreams and learn to be happy with what they are, which is rubbish."

In Sunderland, local cinemas are playing Newcastle's game against Aston Villa to packed houses, with one critic describing it as 'an absurdly exaggerated version of the Marx Brothers at their most surreal and outlandish'.

St John's Ambulance volunteers are on hand for the moment Damien Duff deflects the ball goalwards, as hard-pressed usherettes move in to mop-up all the urine.

Duff has been named a Freeman of the City of Sunderland, bestowing the ancient right to chase a barmaid across the Wear Bridge with a monkey wrench without having to pay the traditional toll of four Benson and Hedges and a jar of meat paste.

The reaction to Middlesbrough's relegation was more muted as most Premier League supporters had assumed the club had gone into administration some time around 1998.

West Ham manager Gianfranco Zola said: "So that was the real Middlesbrough? I thought it was some kind of tribute band. How fascinating."

Meanwhile Ricky Sbragia has resigned as Sunderland manager after failing to get his side relegated, adding: "We cannot maintain a savage, inexplicable rivalry with Newscastle and Middlesbrough if we are in the league above them and for that I am truly sorry.

"I only hope the new manager can succeed where I have failed. Or the other way round, if that makes more sense." 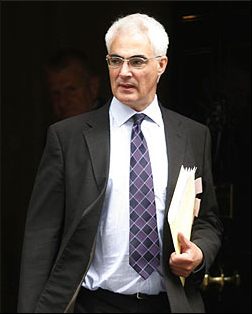 NINE government ministers used £11,000 of taxpayers' money to scour Britain for the tiny handful of accountants who don't know what capital gains tax is, it emerged last night.

Chancellor Alistair Darling, Borrower Hazel Blears, pornography enthusiast Jacqui Smith and six other non-entities insisted they had acted within the rules that allow them to dodge the tax system they gleefully impose on you under threat of imprisonment.

A Treasury spokesman said: "Most of the money was used to hire the army of private detectives who went out and found the accountants in the first place.

"An accountant will generally not admit that he doesn't know what capital gains tax is, so you have to try and catch them out with a few carefully worded questions.

"A typical question would be, 'I have two houses, I sell the one I don't live in most of the time, are there any tax implications?'. The correct answer is of course, 'I have no idea what you're talking about', although we would also accept, 'how are you spelling "tax"?'.

The spokesman added: "Darling's got to be fucked this time. Surely to God?"

Meanwhile Eric Joyce, the Labour backbencher with the highest expenses claims of any MP, said he would 'suck it and see' after admitting he forgot to pay capital gains tax. Twice.

He added: "Sucking it always worked with Tony Blair, though I'm told Gordon Brown prefers to have it rubbed vigorously with coconut oil until it goes off in your hand like some kind of creamy firework. Anyway, we'll see."

And as the expenses scandal threatened to sweep away dozens of sitting thieves, Tory leader David Cameron said his party's candidate list will now be opened up to Britain's freaks, weirdos and grade-A nutjobs, rather than a few ex-barristers who urgently need their stables re-varnished.

A spokesman admitted the party 'may now shift a tad rightwards', adding: "The next manifesto should certainly have some really fascinating things to say about racial theory, while we're looking forward to a vigorous debate about exactly how homosexuals should be put to death."