The Stratford tower will be shaped like a lower intestine and hold up to 350 heavily-armed maniacs from every corner of the globe.

A restaurant built into the structure will ensure that anyone planning a lengthy siege will be amply catered for with Michelin-standard cuisine and five star service.

Kapoor said: "I wanted to create something that would inhabit the space rather than define it while at the same time giving disaffected loners a fantastic array of kill shots."

London mayor Boris Johnson added: "I love it, it's just like being given the Meccano set I asked for when I was eight, instead of the signed photo of Alec Douglas-Home and the new pair of sodomy trousers that I actually got."

Alternative structures were considered by Johnson, including a 'Mugger Of The South' by Antony Gormley – a 300-foot steel and copper depiction of a skunked-up teenager knifing somebody in the kidneys for their iPhone.

Other designs included Banksy's policeman wearing a clown mask, which critics said was a 'wry comment about something, possibly capitalism' while former prime minister Tony Blair suggested another dome.

Johnson insisted the tower will help the UK team garner a record haul of medals as it will be the perfect vantage point for picking off better and more successful athletes from Jamaica and the United States.

Wayne Hayes, a recently-sacked postman from Ilford, said: "My burning hatred of all humanity has only just begun, but by 2012 I estimate I will have some particularly lucid theories about why the blacks and the Jews got me fired for stealing birthday cards."

He added: "This is my gun. She's called Cheryl."

Audiences Charmed By Random Collage Of Violence And Foul-Mouthed Toddlers 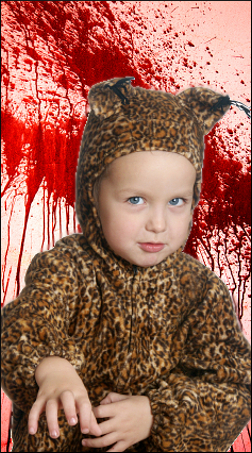 The film, which has no connecting narrative, features nameless characters having their heads severed with a rusty scythe before a three year-old boy dressed as Hitler yells 'arse-bastards' at the camera and rips the legs off a toad.

The scene is followed by a pair of two year-old twin girls screaming 'cock-fucker' at each other against a backdrop of 16 nuns being cut in half from top to bottom by a vampire rock star wielding a six foot-long sword shaped like an erect penis ejaculating blood.

Screen writer Jane Goldman, wife of the jumped-up researcher Jonathan Ross, said: "I noticed that no-one under the age of 35 who's not gay leaves a cinema saying 'what an involving and original story'.

"They talk about the bits where someone's head explodes like a milkshake, or a gangster gets swallowed whole by a shark, then shat out and electrocuted before being fed into a threshing machine.

"And of course they also appreciate just how clever and witty it is to make little children swear, especially if it's cute swearing like 'c**tpuppy' or 'fuckmuppet'."

She added: "So there you go, a little glimpse behind the wizard's curtain."

Producer Tom Logan said: "We're going to stay faithful to the vision of the original by making exactly the same film."

But reviewer Helen Archer said: "Ballbag Explosion is proof that we are so utterly deluged with cultural effluent that we will stare slack-jawed at anything, processing a stream of cinematic detritus as dumbly as an earthworm processes soil.

"So for that reason I'm only giving it four and a half stars out of five."