MAGNETO has destroyed the Olympic Stadium, after becoming convinced that the Paralympics is a gathering of superheroes.

The supervillian had seen Channel 4 advertisements describing Paralympians as superhumans and portraying the incidents that caused their disabilities as comics-style ‘origin’ events.

Magneto, who can generate magnetic fields at will, infiltrated the Paralympics opening ceremony disguised as actor Ian McKellan, to whom he bears a striking resemblance.

Paralympic runner Tom Logan said: “The evening was going swimmingly until Magneto/Ian McKellan’s speech, which was all about how he was going to rule first the Earth, then the universe, with an iron fist.

“He said we must join his army or die. Clearly this didn’t really fit with the overall tone of the event, which until then had been more celebratory than dictatorial.

“Then he put on this weird helmet and all the metal things in the stadium started to hurtle towards him. As you can imagine, that’s a big deal in a place where there are thousands of wheelchair users.

“I think I set a new sprinting record last night, running like buggery in the opposite direction.”

After wreaking havoc in the stadium, Magneto fled with Stephen Hawking and the Queen.

Villainologist Emma Bradford said: “He’s probably going to force Hawking to create some sort of physics-based superweapon, like a portable black hole. Then Magneto will marry the Queen and declare himself King of the Universe.

“That’s pretty good going for someone whose superpower is basically that they’re a magnet. I guess, like the Paralympics, it goes to show what you can achieve if you put your mind to it.”

Clegg and Cameron clash over best route to Tesco 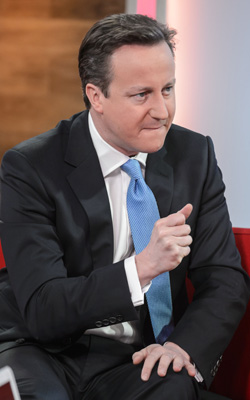 A CONFLICT over the quickest way to the supermarket is the latest rift in the ever-weakening coalition.

Nick Clegg and David Cameron have been sharing a car for their Sunday morning shopping trips, but the arrangement is in turmoil following Clegg’s repeated assertions that the ring road is quicker than the prime minister’s preferred route through the town centre.

Tory backbencher Denys Finch Hatton said: Passive-aggressive remarks from the passenger seat are pushing David Cameron to the limits of his patience.

Clegg will phone his colleagues on the drive confirming with a sigh that yes, theyre stuck in traffic again, while David grips the steering wheel with white-knuckled hands and cranks up the Archers omnibus.

“However David is equally bloody-minded, and often responds to Nick’s travel suggestions by reminding him that the reason he isn’t fucking driving is because he’s only got a provisional license.”

The prime minister now wants to add a third third lane to the road towards the supermarket in a desperate bid to reduce the amount of time he has to spend in the car.

However Clegg is demanding a referendum, insisting that the nation should decide whether in fact turning left at the Wickes garage and going via the retail park isn’t both quicker and more ecologically sound.

Finch Hatton said: While Nick is perfectly prepared to bend on health, education, welfare and basically any other issue, he will not compromise on potentially getting car sick.

“As their relationship deteriorates it’s likely we’ll see more policy-making based on mutual antagonism. For example Nick really likes the progresssive rock supergroup Asia, so David is drawing up plans to have their music outlawed.

“Meanwhile Nick is insisting that any additional airport runways must go through Chipping Norton.”