MANCHESTER United has pledged to stop fans smuggling puzzles, games and books into Old Trafford to keep them occupied during matches.

The club has trained its security staff to spot a sudoku book being concealed inside a match programme and bags are being searched for novels.

Suspicions were raised during the team’s 0-0 draw with West Ham when a Marouane Fellaini near miss was greeted by absolute silence, except for a dispute taking place over a game of ‘Buckaroo!’ in the Stretford End.

A Manchester United spokesman said: “We will not tolerate fans being entertained.”

Season ticket holder Wayne Hayes said: “Since August I’ve read most of Dickens. It has been a literary feast, courtesy of Louis van Gaal.”

He added: “I’m taking my tax return to the Norwich game.” 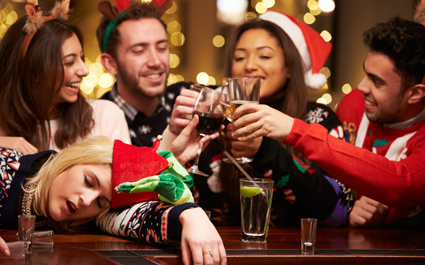 PEOPLE with a low alcohol tolerance have outlined the ways in which they plan to humiliate themselves over Christmas.

Office manager Donna Sheridan said: “I rarely drink, so after three glasses of wine at our company do I’ll start dancing manically on my own as if doing aerobics.

“I’ll only stop to hassle people who clearly don’t want to dance. Then I will go in the disabled toilet and start banging on the door for somebody to let me out even though it is unlocked.”

Accountant Tom Logan said: “I’m not used to alcohol, so when my uncle Jim persuades me to have some of his sloe gin I’ll drink it like Ribena then become an absolute basket case.

“All sorts of exaggerated nonsense will come out – how I’m basically cleverer than everyone else in the world and if I became an MP, I’d be prime minister within five years.”

Marketing consultant Stephen Malley said: “This year I don’t want to get wasted on mulled wine and chat people up with lines like ‘I’m not a photographer, but I can picture us together’.

“Instead when I’m drunk I will get a strange desire to go to a club on my own, resulting in wandering around pointlessly for hours and then paying £60 for a taxi home.”