Mancini to buy entire Arsenal squad for a laugh

ROBERTO Mancini will purchase every member of Arsenal’s squad, with the obvious exception of Eboue, just to see the look on Arsene Wenger’s face.

After his signing of Clichy and the bid for Nasri enraged the self-proclaimed ‘Professor Of Third Place’, Mancini will continue buying the rest of their former teammates every couple of days until Wenger performs an as-yet-unnamed forfeit.

Mancini said: “By the time we get to Bendtner, it’s going to be obvious we’re just taking the piss, but to be honest that’s just going to make it even better when we follow it up with a £21m bid for Almunia.

“It’s going to be difficult to keep a straight face when Almunia holds up a City shirt up, especially as he will drop it several times – but it’ll be totally worth it.”

Mancini has also asked City’s billionaire owners to buy Arsenal’s Emirates Stadium and rename it the ‘Arsene Stinks Of Piss Stadium’ as the cherry on the top of his elaborate prank.

Footballologist Wayne Hayes said: “To draw a Panini football sticker analogy, Wenger is the kid who carefully buys a packet every now and then and makes the most of the players inside whereas Mancini is the flash kid whose dad just buys him a whole box of them to keep him quiet.

“The current disagreement between them is the equivalent of Mancini getting Wenger in a headlock behind the PE block and demanding he hand over the few cards still in his ‘need’ pile.”

Despite Mancini’s prank injecting hundreds of millions of pounds into Arsenal to rebuild the squad, the money will be useless as the Italian plans to follow Wenger to every transfer negotiation and offer an extra 50p on top of whatever Wenger bids. 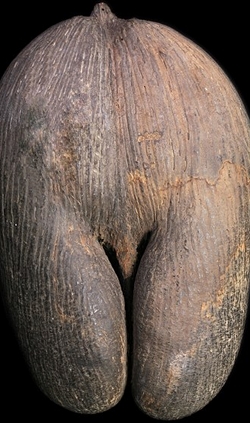 THE Duke of Cambridge has abandoned his wife after bonding with an erotically-shaped coconut, it has emerged.

The so-called ‘love nut’ was presented to the royal couple by natives of an unnamed island in the Seychelles, who simply thought it was funny because it looked like a bottom.

It has emerged that half way through their honeymoon the duke left the £4,000-a-night suite he was sharing with his bride, taking up residence on a remote beach with the nut, which, according to sources, he named ‘Lady Kahuna’.

A royal source said: “It’s like the Wallis Simpson debacle all over again, but considerably graver as at least she was only an American and not a fruit of the palm family.

“The islanders thought the coconut was merely an amusing curio, but from the first meeting William couldn’t take his eyes off it, insisting that the voluptuous tree-fruit have its own seat beside him at the evening’s ceremonial dinner.

“Throughout the meal he was addressing jokes and anecdotes to the coconut, and was seen to repeatedly touch the wiry hair covering its hard curvaceous body in an awkward, curious manner.

“The duke disappeared before dessert. After two hours of searching, Kate found him asleep on the beach, his arms about the coconut as the waves lapped around them.

“The duchess demanded he return with her to their accommodation, without ‘La Kahuna’. It appears he told her to fuck off.”

The nut has now been installed in its own set of rooms at Clarence House, while Prince William has told his wife she will be required solely for the production of heirs.

A friend said: “Kate is lucky William can’t breed with the coconut otherwise she’d be acting as spokeswoman for her sister’s arse.”