PAUNCHY company director and Olympic sponsor Stephen Malley is the world’s fastest sprinter, it has emerged.

The news of Malley’s advance Olympic victory follows the revelation that anyone with a few million to throw into the 2012 kitty could have a go on the torch.

46-year-old Malley, who is chief executive of IT giant Hobbscom, said: “Although I have asthma and a slight draggy leg, I am surprisingly swift on my feet.

“Also handing over an eight-figure sponsorship fee has lightened my pockets considerably, making me more streamlined.”

Malley will also be named winner of the Women’s Triple Jump when the games take place this summer.

It has also been announced that firms including Adidas, Cola-Cola and Samsung are to sponsor Britain’s waning enthusiasm for the games.

The companies have collectively donated a giant heap of tenners which will be handed out to Britons in exchange for repeating phrases like ‘Team GB is the best team’, ‘I like sport’ and ‘Running is fun’.

A London 2012 spokesman said: “Nothing motivates the people of Britain like cold, hard cash. However they will have to sign a form promising they’ll spend it on trainers, not beer.”

Royals back at their shit office jobs 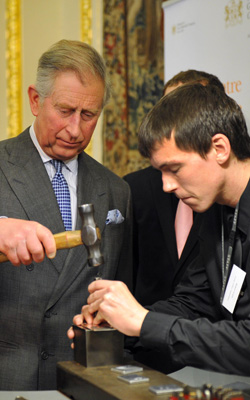 MEMBERS of the royal family are gutted to be back at their desks after a four-day break, it has emerged.

After a bumper four-day weekend of celebrations and boozing the British monarchy, who have to do normal shit jobs to make ends meet, have returned to normality with a bump.

Prince Charles is a sales ledger clerk for a building supplies firm in Gloucester.

He said: “I’ve got arseloads of emails to delete and a banging headache from all the grog.

“It was a great weekend but I’m wondering whether it was all worth it, I’m really rough today.

“I wish I didn’t have to be here but I’ve got two kids, no pension and a girlfriend who spends all my money on hats.

“Ideally being a prince would be something one could do full-time, although I’m not sure exactly how that would work.”

Meanwhile Princess Anne is back at work as a receptionist at Fitness First in Cheltenham.

She said: “The juice dispenser’s broken and we’ve run out of large towels. It’s absolutely typical of when I have a couple of days off, everything goes to pot.

“Also I feel horrific and have just had a proper full-on whitey in the disabled toilets.”