PREMIER League football is in some way linked with lots of money, internet sleuths have claimed.

Sportologist Tom Logan said: So if Im reading this correctly, City and United have both invested their own money in a way they saw best for their business interests? Why has this startlingly clever revelation only just occurred?

Perhaps these people could use their laser­-guided insight to study whether neighbouring countries vote for each other in Eurovision or politicians sometimes lie?

The internets legion of happiness-vacuums are now calling for all sport to be run on a purely non­-profit basis and be played just for the joy of it, like crown-green bowls or badger­-baiting.

Tom Logan said: “They argue that because professional football is typically played by the kind of people who used to chuck their PE kit onto the roof of the science block, it should not be allowed to have the same operating budget as the superhero film industry.”

IT expert and multiple internet forum moderator Wayne Hayes, aka Sheeple69, said The difference between a work of art like Avengers Assemble and watching Manchester City is that the film is about a group of physically enhanced people and one unstable beast with varying levels of loyalty battling to overcome a seemingly-­unstoppable foe. 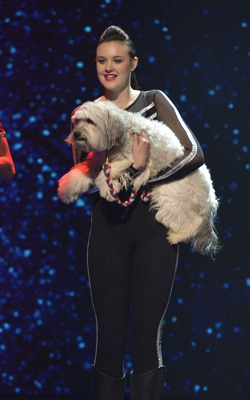 THE winner of Britain’s Got Talent has described how he overcame the nightmare of tag-ons to achieve success.

However the dog has since revealed he suffers from winnits, also known as clags or danglers, a common complaint among long-coated animals.

Pudsey said: “When you are covered in thick, coarse hair but lack the opposable thumbs necessary to use toilet paper, they are a fact of everyday life.

“Sometimes my owner Ashleigh cuts them off with scissors. But it’s never long before I’ve got another.

“Imagine going out for dinner at a nice restaurant, then realising as you walk in that everyone is staring at your anus. That’s how I was living.

“But expressive dance has given me my dignity back and now I accept poo crumbs as a part of me.”

Pudsey plans to donate half of his £500,000 BGT prize money to the National Clag Centre, a charity working with those plagued by stubborn faeces.

BGT impresario Simon Cowell said: “With this dancing dog we have finally found ‘the level’, the semi-mythical intellectual place at which Britain is truly happy.”