TENNIS will start being played in Britain today apart from all the other places in Britain where it is played all the time.

Many people who watch tennis for the two weeks it happens specifically in South West London think that Andy Murray has a great chance of winning the trophy or cup or whatever it is because some people who watch it the other 50 weeks of the year say so.

He then said some other things that people struggled to understand because of his accent.

Nikki Hollis, considered an expert on tennis amongst her friends because she watched that Woody Allen film with Scarlett Johansson in it most of the way through said: “I think Andy’s got a great chance this year because he’s really improved his forehead.

“Anyway, he should be okay as long as he avoids Sampras because he can hit the ball very hard.

“Really? When did that happen?”

She added: “Anyway me, Holly and the girls managed to get tickets tomorrow for court five and it should be a really good day’s tennis because all the rain we’ve been having has done wonders for the strawberries.”

The weather could play a vital role in this year’s tournament, as many fear delays will cause them to have to pretend to care about the whole thing for more than the scheduled two weeks.

Organisers have also warned that two months of solid rain, alongside the combined genital excitement of thousands of confused housewives, might turn Andy’s Acclivity, formally Henman’s Hump, into a dangerous mudslide that could joyfully engulf the entire complex. 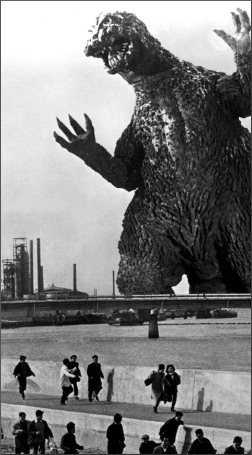 THE studio which produced Godzilla and Mothra has purchased the character rights to Sarah Palin and Michele Bachmann, it has emerged.

Legendary Japanese monster film creators Toho Studios is currently developing the feature film Palin vs Bachmann: Battle for the Teapots in which the prospective presidential candidates are depicted as towering, destructive extra-terrestrial beings fighting for dominion over the Earth’s craziest psychopaths.

They will be portrayed by anonymous middle-aged Japanese men in rubber suits.

A studio spokesman  said: “The story begins with 50-storey Palin, Queen of the Monsters, safely ensconced on Monster Island, behind a giant electrified fence.

“Huge and indestructible with serrated bear claws each bigger than a village, Palin is kept appeased by the natives of Monster Island with a diet of homosexuals and abortionists, which are sailed into her maw on massive edible ships.

“Bachmann emerges from the space rock with a planet-shaking roar, firing deadly rays from the black, teat-like protruberances covering her 1000ft body.

“As Bachmann rampages across the globe humanity is left with no choice but to release the only force destructive enough to stop her – the original Mama Grizzly.”

He added: “I won’t spoil the ending but it involves an oil rig full of nuclear warheads and a possible guest appearance from Rodan, the giant pterosaur.

“We believe this film will be a hit because it has all the ingredients of a classic kaiju or ‘giant monster’ film but with the added bonus that the antagonists are weirdly sexy.

“Also currently on our slate is Gordon Brown Meets Gamera, a project hinged entirely on the fact that the name sounds good.”