No such thing as Arsenal fans

THERE is no such thing as an Arsenal fan, it was confirmed last night.

Across north London the fan base of the unsuccessful football team suddenly ceased to exist as people previously believed to enjoy watching them said they had never even heard of Ian Wright.

Meanwhile thousands of puzzled Tottenham Hotspur fans banged loudly on neighbours’ doors only to find that they had gone deaf or that the only sport they had ever enjoyed was rugby league.

Stephen Malley, from Highbury, said: “I find football to be rather ghastly and prefer to spend my Saturday afternoons browsing antique shops and looking for interesting teas.

“That? That’s a cardboard cut out of Olaf Bergkamp. He is a concert pianist of some note though I believe his twin brother was a footballman who may have plied his trade in the vicinity.

“And yes, some concert pianists do like to wear shorts. They find it more comfortable.”

Thierry McKay, from Islington, said that for some reason he had received 648 text messages from a Spurs-supporting acquaintance including one threatening to dawb ‘Spurs Champion’s League Quarter Finalists’ on his forehead before forcing him to perform oral sex with a smile on his face.

Meanwhile Tottenham are celebrating their win over a Milan side with the combined age of Ben Nevis, and looking forward to their inevitable defeat in the next round, probably at the hands of something called a ‘Schalke’.

The club has also arranged for a laminated printout of last night’s result to be placed in the trophy cabinet at White Hart Lane alongside their 2008 Fair Play award and Ledley King’s victorious £5 scratchcard. 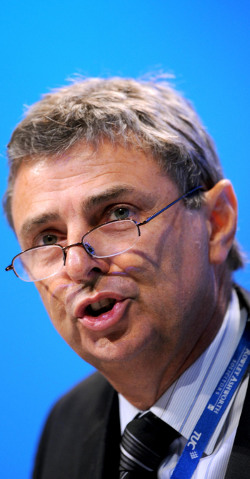 BRITAIN is today extending a gracious invitation to the public sector to suck on it until they gag.

As it moves closer and closer to them, millions of government workers are making their mouths as small and tight as possible amid fears it will taste as bad as their private sector friends have warned.

“I’m begging you, please don’t make me suck it.”

Meanwhile unions have threatened strike action stressing public sector pensions were clearly affordable in the run up to the collapse of Lehman Brothers when the deficit was a piffling £68bn and rising and pensions were funded by nice corporation taxes from profitable banks run by geniuses.

Meanwhile Tom Logan, a man who does something for a company in exchange for about thirty seven grand a year and four weeks holiday, said: “A lot of public sector workers complain about unpaid overtime. It’s almost as if they have one of those clauses in their contract which reads ‘and any additional duties as required’. You know the one.

“Now imagine how that tastes when it is slowly folded into a pension that’s made of raw shite.

“Admittedly, if I was a public sector worker I would not be relishing the prospect of sucking on it, but I also reckon I would at least have the nuts to admit that the deficit is my fault too.”

He added: “Meanwhile I’m being fucked by politicians, fucked by bankers and grimy hedge fund monsters and fucked by trade unions and the whining, snivelling, entitlement monkeys they represent.

“I simply don’t have any more holes to be fucked in.”